U.S. Chamber of Commerce: Dark Overlords of the Universe 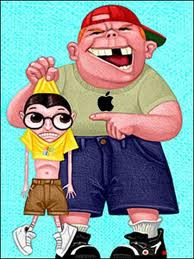 The U.S. Chamber has been at war with all elected Democrats. That's just a fact. They clearly hate any progressive idea. They certainly hated health-insurance reform. And recent leaks of some 40,000 e-mails from the "security" and dirty tricks firm HBGary Federal proves that the Chamber had hired them (and others) as "operatives" to smear their critics.

The affiliated North Carolina Chamber of Commerce recently hosted GOP leaders in the NC General Assembly, who are busily carrying water for the powerful business interests that want environmental regulations rolled back, like a cheap rug at a dance house-party.

Meanwhile, President Obama baked the U.S. Chamber a bread pudding (or something) and walked up the street to curry their favor.

With Citizens United the Supreme Court unleashed this would-be tyrant, which means to own our government at every level.

We noted last fall, when the Boone Chamber held its candidate forum in the County Courthouse, that the executive director denied any affiliation with the U.S. Chamber. That denial is apropos the U.S. Chamber's bullying. We're only now finding out just how nasty the bullying is likely to become, both nationally and in NC.
Posted by J.W. Williamson at 2/14/2011 12:54:00 PM
Email ThisBlogThis!Share to TwitterShare to FacebookShare to Pinterest
Labels: Boone Area Chamber of Commerce, corporate power, U.S. Chamber of Commerce, U.S. Supreme Court, Wikileaks

This is what the NC Chamber wants (http://www.news-record.com/content/2011/02/13/article/lawmakers_aim_to_put_brakes_on_regulatory_rules), and they're by God getting it!

The fascinating thing here to me is how interested ThinkProgress, Huffington Post, and J.W. are in tying this to the Chamber of Commerce. I mean, just look at J.W.'s title for the thread: "U.S. Chamber of Commerce: Dark Overlords of the Universe".

But, if you follow the links and read the entire memo, the incriminating letter was written as advice from an attorney. It is not action taken by the client.

"But mom, I didn't! I told the attorney to take his advice and stick it in his pie hole!". Advice from an attorney means nothing unless it is acted upon.

And let us not forget: This advice was given, not for an aggressive attack campaign, but as a means of defending against an attack being launched by the very group who now seeks to use this email in the course of their attack. This is not objective journalism. It is one arm of an all-out assault on the Chamber.

Congrats, J.W., on your willingness to help carry the torches and pitchforks. Do you know where you are going, or just following Huffington's lead?

Do you know where you are going, or just following Huffington's lead?

Get real, Mike. When have the lefties here ever veered from the Journolist narrative? JW will complain about the Chamber until Axelrod decides the 2012 campaign needs a new target to demonize, and then JW will suddenly discover how awful that new target is and forget about the Chamber.

How about aiming some of those pitchforks and torches at the Boone Area Chamber of Commerce?

The Chamber was up to its ears in this one, and anyone claiming otherwise is an idiot:

"Despite the Chamber’s insistence that they were “not aware” of HBGary’s proposals, a November 16 email between Aaron Barr of HBGary and Berico Technologies indicated that members of Team Themis had been communicating about the “sensitive” Chamber project.... Other emails records indicate that H&W told Team Themis it was in constant contact with the Chamber about the project."

Some people jut won't believe what they don't want to believe. And it's really rather sick that anyone would try to.

"The project". It sounds so nefarious. "The chamber was up to its ears in this one". You are very good at writing emotion into nothing, making it seem like something.

All you care about is burning your witch.

The truth is, if the Chamber had, in fact, taken the advice of the law firm, the media outlets you love to hate would certainly have picked up the story, as the law firm indicated, and we would all know about it by now. But the fact that Drudge, and Breitbart, and FoxNews have not reported on it makes it fairly obvious that the Chamber did not take the advice of the attorney.

I know it sucks for you, because you really, really wanted to burn your witch, but it's just going to have to wait. You may have been turned into a newt, but it would seem that you got better!

But the fact that Drudge, and Breitbart, and FoxNews have not reported on it makes it fairly obvious that the Chamber did not take the advice of the attorney.

Mike D, you're so dumb you think the above are actually news outlets? As for "burning witches," have you noticed that your ass is on fire?

"the media outlets... Drudge, and Breitbart, and FoxNews" - Mike D.

"Mike D, you're so dumb you think the above are actually news outlets" - Anne