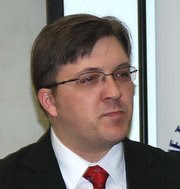 Meet Glen Bradley, new Republican member of the NC House from Franklin, Halifax, and Nash counties, tea party favorite and hot to trot "nullifier" of federal laws. (He also describes himself as "Originalist Messianic Christian" on Facebook, which got us Googling. Is there such a thing as a "non-Messianic Christian"?)

So we have a back-bencher Republican state rep. slapping at the reigning Senator Burr. What's Speaker of the NC House Thom Tillis to do? First, deny that he knows anything about Bradley's bill and then make a joke about wing-nuttery in his own party: "House Speaker Thom Tillis says he’s not familiar with Bradley’s bill but noted that 'the election cycle has produced a lot of diversity of thought.' " (If there's a nastier word in the current Republican lexicon than diversity, we don't know it. Well, maybe gay.)

Bradley is one of a growing breed of tea partiers, the "Tenthers," who based on their reading of the 10th Amendment reject any federal laws not explicitly enumerated in the rest of the Constitution. His NC Farmer’s Freedom Protection Act explicitly states as much: "Section 2. ... Under the Tenth Amendment to the Constitution of the United States, the power to regulate intrastate commerce is a power reserved to the states, as it is not enumerated as a power of the United States."

Clearly, Thom Tillis wants nothing to do with a state bill trashing the work of Sen. Dick Burr, but he's got to handle Rep. Bradley and the others like him and that fraction of the NC Republican Party (like the Caldwell Tea Party) that thought it was cool sending them to Raleigh to run things.
Posted by J.W. Williamson at 2/10/2011 10:45:00 AM
Email ThisBlogThis!Share to TwitterShare to FacebookShare to Pinterest
Labels: Glen Bradley, Richard Burr, teabag protest, Thom Tillis

The food safety and modernization act is designed to punish family owned farms throughout the United States. Large, corporate farms have enough capital and cheap labor in the form of undocumented immigrants to push through USDA regulations. Small family owned farms do not. Take the heirloom apple orchard in Ashe county that I bought several seedlings from last year. This family owned farm sells apples, produce and products they raise on their farm. Under the Food Safety and Modernization Act, they too will come under control of onerous USDA regulations which would make it very hard for them to survive. Senator Burr should be blamed for supporting the Food Safety Modernization Act, but most Democrats voted for this bill as well. It passed with large bi-partisan support. This is where the Tea Party will benefit us all. Being opposed to government regulation of any kind, the Tea Party will tear the Republicans apart wtih issues such as this. This show is going to be so interesting to watch. I am fascinated at Tea Party members attacking Republicans the same as they do anyone else. In other words, they are issue oriented, not vote oriented. Think of how great Congress would be without Richard Burr and Virginia Foxx who turned on their own voting base in 2006 over the Blowing Rock land trade. The Tea Party has no problem calling them out on these issues. Tea Party gets my vote in 2012.