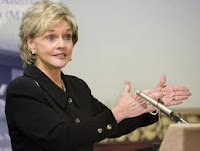 This report says that lower- and middle-income folks in North Carolina are taxed at a higher rate than the supremely rich: If you make $15,000 a year, you pay almost 10 percent of it in state and local taxes. If you make $15 million a year, your tax rate is less than 7 percent.

Money quote: "So if you were Gov. Bev Perdue, a Democrat at the time of her election, and you were trying to raise revenue to help fill a $2.4 billion budget hole, wouldn't you look to raise it from the folks who have it — the rich — while also trying to make the tax system in North Carolina at least slightly less regressive?"

The answer to that question would be a big fat "no."
Posted by J.W. Williamson at 2/23/2011 10:28:00 AM
Email ThisBlogThis!Share to TwitterShare to FacebookShare to Pinterest
Labels: Beverly Perdue, income tax inequity, North Carolina budget