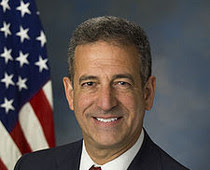 Former Senator Russ Feingold, whom the voters of Wisconsin retired last fall, has launched Progressives United, "aimed at countering the impact of corporate money in politics."

“Washington, sadly, has become a playground for corporations and our lobbyists,” Mr. Feingold said. “It’s time we stood up to the total dominance of corporate power that’s invaded our democracy and hijacked our elections.”

Sidenote: Wisconsin was smoking something really mind-bending last November, because they also turned their entire state government over to the Republicans. Their new Republican governor immediately went to war with public employees, moving to take away their rights to collective bargaining.

The result: an uprising of citizens that makes it look like "Cairo moved to Madison," as someone remarked today. I've been perusing the Wisconsin State Journal for photos and local coverage. And loving it that the 14 Democrats in the state Senate have disappeared, preventing the 19 Senate Republicans from achieving a quorum. Also loving it that there's massive resistance on the part of public school teachers and other workers whose labor is totally essential for the functioning of the state but is dissed by the Republicans.
Posted by J.W. Williamson at 2/17/2011 03:08:00 PM
Email ThisBlogThis!Share to TwitterShare to FacebookShare to Pinterest
Labels: corporate power, Russ Feingold, Wisconsin