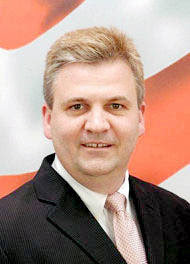 Mr. Stone owns a small grocery store where, until Friday night, he had "video-poker-style" gambling machines set up for the fleecing of his customers. He removed the machines Friday night after repeated calls from an N&O reporter.

Mr. Stone still has available in his store "a variety of sweepstakes games on desktop computer terminals. The games mimic the spinning wheels of a slot machine."

According to the N&O, "State law currently prohibits electronic machines and devices used for sweepstakes purposes," though Mr. Stone maintains that these particular machines are legal.

How come? Because they're his, and "Everything we do is legal." What he apparently meant to say was that he was taking advantage of a period when the anti-electronic gambling law is being litigated in the courts and isn't being uniformly enforced by local sheriffs.

So the "gambling lobby" is swarming in Raleigh, and as of last week Mr. Stone, who makes money on video gambling, was their chief facilitator: "...lawmakers ... are considering making video gambling legal or letting the state lottery run it. Gambling interests are trying to strike a deal and get permission to exist in exchange for more regulation and taxation. The political effort is ongoing and intense."