Watauga Board of Education Slaps Back at Soucek, Jordan 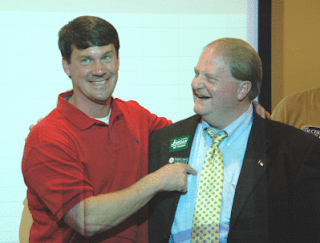 The Watauga County Board of Education passed a resolution at its Monday night meeting publicly opposing NC Senate Bill 8 (as it is currently written) and House Bill 41 in its entirety, directing that Superintendent Marty Hemric send a letter to Representative Jonathan Jordan and Senator Dan Soucek, asking them to reconsider their co-sponsorships of those bills and to make “funding schools first” a priority.

More about the bills below, but it’s striking that this resolution passed unanimously, with all three Republicans on the board – Deborah Miller, Lee Warren, and Delora Hodges – voting to protect public education from the wholesale dismantling currently underway in Raleigh.

NC Senate Bill 8 (“No Cap on Number of Charter Schools”) passed through the Senate Committee on Education yesterday. Though Charter schools get taxpayer money, they will will not be required to provide transportation or food service to their students, one factor alone that tends to make Charter schools enclaves of privilege. New language inserted into the bill would allow revenue from “supplemental taxes” to follow the child from that district to any other charter school in any other county. (Previous law allowed for revenue from supplemental taxes to follow the child only if the child from the supplemental tax district attended a charter school located within the physical boundaries of that taxing district.) The bill retains language allowing charter schools to request capital funds from county commissioners (yikes). There is no language dealing with the practice of charter schools sending children back to traditional public schools within 45 days of a test.

The most substantial change in the bill (from school boards’ perspectives) is a revenue-sharing mandate that would threaten More at Four or other early childhood education programs. These programs are funded largely from privately paid tuition and fees for summer school, revenue generated through private rentals of school board property, interest earned on local school board investment, reimbursement for indirect costs incurred for implementing mandated programs, and program-restricted funds for pre-school offerings. According to new language in Senate Bill 8, those revenue sources will now have to be shared with Charters.

House Bill 41 is an even more obvious assault on public education. It would provide $2,500 in tax vouchers to anyone willing to jerk their kids out of public schools and put them into private academies. Under this provision, a local county commission can add another $1,000 in tax vouchers to that little prize.
Posted by J.W. Williamson at 2/17/2011 09:04:00 AM
Email ThisBlogThis!Share to TwitterShare to FacebookShare to Pinterest
Labels: Dan Soucek, Jonathan Jordan, public education

Though Charter schools get taxpayer money, they will will not be required to provide transportation or food service to their students, one factor alone that tends to make Charter schools enclaves of privilege.

Enclaves of privilege?! Are you on drugs?

I'll give you credit--at least this time you acknowledge that charter schools are public schools, so you're learning. But here's a challenge, if you really believe what you're writing instead of just being a hack for the teacher's union: you--and your leftie commenters--go to the local charter school for drop-off or dismissal. Take a look at the facilities. Take a look at the cars people drive. Then you go to Hardin Park and do the same. Only then--when you have at least a vague understanding of reality--come back and talk about "privilege."

But you won't do that, will you? You'll just sit in your little ideological bubble and and parrot the teacher's union narrative. Because it's for the Chiiiiildren.

Maybe if public schools did a better job, they would not need to worry about vouchers hurting them.

If you're taking public money, then you should take the public. I share JWW's concern that an explosion of charter schools would be a sure way to turn our public schools into ghettos for the very poor. Not providing transportation to school and not providing school lunches certainly would automatically rule some parents out of participating.

"According to data from the state Department of Public Instruction, 62 of the 99 charter schools currently operating in North Carolina are either predominantly white or predominantly black. Statewide, enrollment at 41 of the current charter schools is 80 percent white or higher; at 21 charters, enrollment is at least 80 percent black or black and Hispanic." (http://www.indyweek.com/indyweek/republicans-want-more-charter-schools-democrats-worry-theyre-segregated/Content?oid=2032474)

I attended the board meeting and actually the board members thought that some of the bill was good and was actually wanting changes to certain parts of the bill. As Delora Hodges said: "I am not in agreement with the bill in its entirety."

Oh, for Pete's sake, Rubashov. For the thousandth time, there is NO teacher's union in NC. In fact, it's prohibited by the state constitution.

Betty, what is the NC Association of Educators?

This association refers to itself as a union.

Note that the union reference is from the NCAE site, not a Google label. If they can call themselves a union I can call them one too. Any more questions?

Yes, I see that on the Google page, but I don't see it anywhere on the NCAE's actual web site. I'm not convinced that they do refer to themselves as a union. In any case, there is NO collective bargaining for teachers, and no union contract. Teacher's can't go on strike, either.