They Won't Brake for the Poor 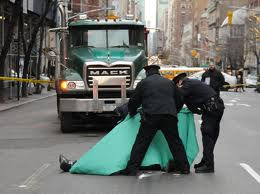 The rich in America, and their facilitators in the Republican Party, have always resented paying taxes to support the poor. If Social Darwinism taught them anything, it taught them that the poor deserve to be poor (and conversely, the rich are rich because God wants them to be rich).

So why should the rich pay taxes to support the un-deserving poor? Social Security, Medicare, Medicaid, home heating assistance, meals on wheels, disability, aid to dependent children, food stamps ... the list grows long, and everything on that list is a dreadful, unfair, tyrannical burden on the rich. Why, property taxes to support public education is itself a monstrous outrage, when the rich don’t even use public schools (and the "poorer rich," who do use public schools, are sometimes very successful in finding ways of keeping those others out of their suburban districts)!

In recent memory, the Republican game plan appeared to shift from merely complaining bitterly about having to support the social safety net ... to an active strategy of bankrupting government at every level. How else to explain the enactment of Medicare Part D prescription drug benefit, which was done under a Republican president (George W. Bush) and by the flexing of muscle in the U.S. House by none other than Tom DeLay, The Republican Hammer (and convicted felon). It wasn't paid for by deliberate design.

With government bankrupt, the poor would once again be on their own. Like in 19th century frontier America. Or like in Victorian England. Ah ... the Golden Ages for the rich!

And that’s what’s going on right now. The poor, the disenfranchised, the hungry, the sick will bear the brunt of paying for those billionaire tax cuts. How much can you hit the helpless? You can hit 'em plenty, cause they don’t form a powerful interest bloc. They have no national leaders. Hell, many don’t vote, and the ones who do – and the ones who might in the future, given what’s about to happen to them – will be flummoxed by new photo i.d.s --the "We-Want-State-Certification-Of-Your-Ass-Before-You-Can-Participate-in-the-Democratic-Process” Act.

Plus, let's face it: if there's one thing the rich can buy, it's the ability not to see the poor, not have to look upon them and their pathetic proof of lack of worth. The one thing the rich have above all else in America, it's their ability to be wholly isolated from the rest of society.

Now that President Barack Obama has decided to become a Republican, looks as though the process of burying the poor will speed up considerably. Well, someone has to pay for those tax cuts!
Posted by J.W. Williamson at 2/10/2011 02:41:00 PM
Email ThisBlogThis!Share to TwitterShare to FacebookShare to Pinterest
Labels: Barack Obama, National Republican Party, Republican "brand"

Thanks, JW. Just ran across this about bankrupt-government hype in Texas that fits right into your thesis:
http://www.southernstudies.org/2011/02/how-texas-conservatives-are-manipulating-a-budget-crisis-of-their-own-creation.html

Thanks JW. It's about time someone came right out and said it. All the evidence points to exactly what you expressed in this post.

JW, you forgot to mention the Democrat Party facilitators as well.

I'm sure it just slipped your mind.

Why does every Teahadist posting on this site always say the same thing, "DEMOCRATS DO IT TOO!"

Just for once stand up for what you believe and quit always blaming it on the other guy.

Anonymous says above that JW forgot to mention the Democratic Party "facilitators" as well. JW SMACKED PRESIDENT OBAMA RIGHT HERE IN THE POST.

Thanks, JW, for standing up for principle above all else and no matter who is to blame. Too bad the Teahadists don't have the moral courage to do the same thing.

On a related topic of repressing the poor, does anyone have any information on the "Sullivan Law" and how it was used against the poor? Any information would be appreciated.

"JW, you forgot to mention the Democrat Party facilitators as well."

This is the conservative logic I fail to understand.

No sense of injustice, no desire for a better system, no moral discomfort.
Everything is okay if you believe the other side is guilty of something similar.
Scapegoats, bigotry driven by fear and funded by greed is the conservative movement.

Conservatives have No Vision, No solutions and No compassion.

And they don't read columns before they respond to them either.

The vast majority of those mentioned as victims of Mr. Willaimson's post pay no taxes. They are not the victims of corporations, but are victims of the leftist political system that keeps them enslaved with bread and circus entitlement programs in order to gain their votes.

The best I can tell, the Sullivan Law was enacted in New York City by corrupt Tamany Hall politicians in 1911. The concept of the law is shrouded in a bit of controversy, but most agree the reason for this law was due to large populations of Irish and Italian immigrants that were flooding New York City after the turn of the century. These ethinic minorities were viewed with skepticism and malelovence by many New Yorkers for various reasons. The Irish were looked on as habitual drunkards and womanizers; the Italians as "swarthy" exotics. The Sullivan law was enacted to ensure each of these distinctive groups were not allowed to own or possess brass knuckles, knives, or guns. The first person arrested for violating the Sullivan law was, not surprisingly, an Italian. Many gun rights proponets point to the Sullivan Law as an example of racism. The corrupt Tamany Hall politicians were eventually ousted, but many of their laws still remain. Hope this helps.

I detest both traitorous wings of the, in truth, one-party system in what remains of this once great country. With either fascist wing, we are headed for totalitarianism. Please, get your head out of the false left--right mindset.

Both wings have been co-opted and are controlled by the arrogant domestic and foreign banking houses and their interests.

Can't you understand? These banksters and their Wall Street allies are the REAL enemy.

Mr. Williamson,
You don't know the half of it. Capitol Hill is a traffic jam right now of the well-heeled, working over time to help fashion a Republican budget plan which probably can't be enacted but which may shut down the government.

I grew up in a Republican household and heard conservative preachments all my life, but no one I ever respected as a genuine human being would ever applaud shutting down government. Many -- if not most -- of this new Republican majority cannot contain their glee for the ultimate crashing of the federal government.

Some -- like your congresswoman Foxx -- are just warped. Her psychology is hard to understand: born poor, hates the poor (or at least can't manage an ounce of compassion). She's someone we might expect to disown her own child over ideology.

But while some are just plain mean, drained of any milk of human kindness, others are under-educated and really not even curious about what they don't know. They're dangerous because they're dumb about consequences, and they go along to get along.

The really really dangerous ones, though, are smart, like Paul Ryan of Wisconsin. He's built an intellectual framework to justify his view of the less-than-wealthy. He can propose really callous public policies while tilting his head to the side and smiling, and people love him.

Many Democrats are no better. Some are worse. They slop at the exact same troughs. As much as I'm disgusted by the new Ayn Rand Republicans, I have no love for bought-off Democrats. If there were a viable third party, believe me, I'd be part of it.

If the world the Democrats created is unsustainable, the world the new Republican majority dreams of resembles Czarist Russia, with a fabulously wealthy and detached ruling nobility and a permanently semi-starving peasant class working for low wages and dutifully grateful for crumbs. That's not a world I want to live in. But then I'm a peon.

I'm guilty of a great sin, in that I go about my job and stay quiet -- to preserve my own hide. There are too many like me, silent and complicit in the remaking of our democracy into a cruel plutocracy.

Obama has sold out. Democrats are a train wreck. There are no statesmen or -women left in the Republican Party. By the dawning of 2013, the Koch brothers may be monarchs. They may be already.

"The vast majority of those mentioned as victims of Mr. Willaimson's post pay no taxes."

Most working don't pay Federal Income Tax but pay a higher percent of their total income in taxes than the man who just made 5 billion dollars last year topping the 4 billion he made in 2007. This man's income tax rate was 15% and only a tiny fraction subject to social security and medicare.

The poor pay 7.75% in sales tax, pay tax social security and Medicare is an additional 7.65% plus Gasoline tax, utilities tax, Tax on their vehicles. The total tax rate for working poor is about 17% without paying federal income tax.

The poor rent so they don't get a tax deductions as do wealthier Americans do who pay on a mortgage.

The problem is powerful capitalist have rigged the system to suppress wages lower and lower to the point close to 50% of Americans have no piece of the American dream as they don't earn a living wage. They don't earn enough for their families to live on without charity or government assistance even when working full time.

Would you use that conservative math to show how a person could support a family on $17,000 per year? Show us a budget to pay housing, health care insurance, transportation, clothing, food, education?

There is a fake "Oliver" posting. The real "Oliver" would not stoop to that level of crap.

Nice one, Anne. That sounds waaay cooler than being a tea "partier."

Reprehensible that some of our "reformed poor" politicians are as mean and hateful as reformed smokers are to those who still smoke. Utter disgust, disdain as they look away.
One would hope their ilk would have some empathy, but NOOOOO. Like Billy Goats Gruff, they want them to fall into the abyss so they can be eaten alive. No bridges, or offerings of help for those less fortunate.

Mrs. Foxx believes that she and others who are wealthy and secure are more deserving than the rest of us. She refuses to understand that luck and our stable social institutions make her good fortune possible.
"The race is not to the swift or the battle to the strong, nor does food come to the wise or wealth to the brilliant or favor to the learned; but time and chance happen to them all." Ecclesiastes 9:11