The Koch Brothers and the Wisconsin Uprising 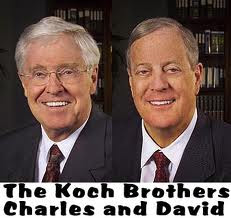 The Koch brothers were major investors in the gubernatorial campaign of Scott Walker in Wisconsin last year. Koch Industries gave him $43,000. Not to mention the untold hundreds of thousands from the Koch-funded astroturf group, Americans For Prosperity.

Why would they care about Wisconsin?

Koch Industries is a major player in Wisconsin. Koch owns a coal company subsidiary with facilities in Green Bay, Manitowoc, Ashland and Sheboygan; six timber plants throughout the state; and a large network of pipelines in Wisconsin. While Koch controls much of the infrastructure in the state, they have laid off workers to boost profits. At a time when Koch Industries owners David and Charles Koch awarded themselves an extra $11 billion of income from the company, Koch slashed 158 jobs at their Green Bay plant.

Koch front groups are closely guiding the Walker agenda. The American Legislative Exchange Council, another Koch-funded group, advised Walker and the GOP legislature on its anti-labor legislation and its first corporate tax cuts.

In response to the growing protests in Madison, Koch fronts are busing in Tea Party protesters to support Walker and his union-busting campaign, particularly the Koch-financed Americans for Prosperity.
Posted by J.W. Williamson at 2/20/2011 11:25:00 AM
Email ThisBlogThis!Share to TwitterShare to FacebookShare to Pinterest
Labels: corporate power, Koch Brothers; Wisconsin, teabag protest

People here need to realize this will not stop in Wisconsin. The Greedy capitalist like the Koch brothers and the Conservative movement will not stop until most American workers are reduced to serfdom living in cramped substandard housing working for a bowl of rice at the end of the day if they have a job. They will be no vacation time off, no pension, no worker rights no time and a half for overtime and most work weeks will be 60 hours or more.

You don't have to have worked for a union to benefit from union strength.

Koch brothers own the NC Legislature, too.