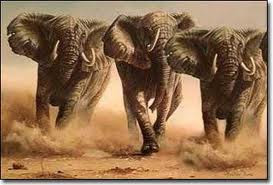 Article VI, Section 1 of the North Carolina Constitution: "Every person born in the United States and every person who has been naturalized, 18 years of age, and possessing the qualifications set out in this Article, SHALL BE ENTITLED TO VOTE at any election by the people of the State, except as herein otherwise provided.”

Article VI goes on to establish the "herein otherwise provided," outlining that those who are citizens, those who’ve lived in their precinct for at least 30 days, and those who are not felons may register to vote and are eligible to vote. There is no word there about having to show an i.d. and, in fact, there is instead an explicit declaration that registered voters “SHALL BE ENTITLED TO VOTE EXCEPT AS HEREIN OTHERWISE PROVIDED.”

Article VI, Section 3 says, “Every person offering to vote shall be at the time legally registered as a voter as herein prescribed and in the manner provided by law. The General Assembly shall enact general laws governing the registration of voters.”

In other words, the state’s Constitution allows legislative laws to govern voter registration, but it does not grant the authority to legislate for additional requirements for casting a vote by a legally registered voter, like state-issued photo i.d.s.

When a photo i.d. law was passed in Indiana, those opposing the law challenged it in federal court. They lost in the United States Supreme Court (Crawford et al. v. Marion County Election Board). The U.S. Constitution contains no language like that in the NC Constitution, and apparently such language does not exist in the Indiana state Constitution.

The Missouri Precedent
However, there’s precedent in Missouri for challenging voter photo i.d. law in state (rather than federal) courts, because the Missouri state Constitution contains language very similar to our Article VI, by which the Missouri Supreme Court found that Missouri’s photo i.d. law violated the state’s constitution for mandating “an impermissible additional qualification to vote.” (A discussion of the Missouri case can be found in Missouri Lawyer’s Weekly.)

The Missouri Supreme Court also found that the voter photo i.d. law violated “the prohibition on interference with the free exercise of the right and the requirement that all elections be free and open,” citing Article 1, Section 25 of the state Constitution: “That all elections shall be free and open; and no power, civil or military, shall at any time interfere to prevent the free exercise of the right of suffrage.”

There’s language corresponding to that provision in Article I, Sec. 10 of the NC Constitution: “All elections shall be free.” And in Article VI, Section 2: “Any person who has resided in the State of North Carolina for one year and in the precinct, ward, or other election district for 30 days next preceding an election, and possesses the other qualifications set out in this Article, SHALL BE ENTITLED TO VOTE at any election held in this State ...”

The Missouri Republican Party’s remedy for the Missouri Supreme Court’s ruling is to amend the state Constitution, and that is exactly what they are now attempting. The measure has passed the Missouri Senate, must also pass the Missouri House and then be approved by the voters of the state.

Free Elections
The Missouri law was also ruled unconstitutional for “requiring the payment of money to vote, in violation of due process and equal protection clauses of the Constitution.”

Article V, Section 1 of the NC Constitution: “No poll or capitation tax shall be levied by the General Assembly or by any county, city or town, or other taxing unit.”

Please note this: Although the Republican legislature in Missouri offered free i.d. cards to anyone not already possessing a driver’s license or other valid i.d., the underlying documents to receive those i.d.s, such as certified birth certificates or social security cards, cost $15 or more. For women who must document one or more name changes, or for people born outside of Missouri, the barriers were even higher and more costly.

Based on those facts, the Missouri Supreme Court said, “The fact that the state does not charge for the nondriver license itself does not void the constitutional issue or economic reality that voters will have to ‘buy’ numerous government documents to get the ‘free’ photo ID to qualify for the privilege of voting. While a license to drive may be just that: license and not a right. The right to vote is also just that: a right and not a license.”

Some Republicans in the NC General Assembly (Jonathan Jordan, for example) are already excusing the cost to state government as "minimal" while also acknowledging that there will be cost. To impose even minimal ($10, say) cost on a registered voter to obtain the correct photo i.d. would amount to a poll tax, which is explicitly illegal under our Constitution. The NC state Board of Elections has already determined that at least 1,000,000 NC voters currently do not have a state driver’s license, and supplying these people with photo i.d.s would cost the state government (us taxpayers!) around $20,000,000.

Republicans have made noise that they intend for the state to pay for the i.d.s for those who cannot afford them, but that’s simply not good enough. Because the NC Constitution says “All elections shall be free,” the state should logically have to pay for those who can afford the i.d.s as well (though we still believe that i.d.s would be an illegal requirement under the state’s Constitution). The words “fee” and “paid for” get tricky since the Missouri Supreme Court said that even free photo i.d.s imposed an undue burden. The documentation required (birth certificates, etc.) are not usually free.

NC Republicans Will Have to Amend the State Constitution
It’s gonna take some work, and maybe they’d like to get started on that before they start ramming photo i.d.s down our throats.

Article XIII, Sec. 4 of the NC Constitution: “A proposal of a new or revised Constitution or an amendment or amendments to this Constitution may be initiated by the General Assembly, but only if three-fifths of all the members of each house shall adopt an act submitting the proposal to the qualified voters of the State for their ratification or rejection.”

It's not Jim Crow any longer, it's Art Crow; Art Pope that is.

'Stop and Identify' laws are about as close as we get, as a country, to forcing people to prove that they are who they are on command.

Come to think of it, we need to be able to prove who we are all the time.

I'm not saying it's right. I'm just saying it is.

Mike, the NC State Constitution says that if a resident of NC wants to vote, s/he is entitled and cannot be required to pay money to exercise that vote. When a person requests to be registered, s/he is verified on the front end: has to show a photo ID, has to prove residency, and has to be vetted by the local Board of Elections. This is allowed under state constitution (required in fact). Why are we trying to refuse LEGALLY REGISTERED voters their right to vote when even the Constitution doesn't allow for it? One reason: "they" don't want specific people to vote.

If one must be able to prove identity to register to vote, then what's the big deal about requiring the same to cast a vote?

I am not trying to contradict the state constitution. I am just saying it doesn't seem like a big deal to me, and I would be delighted to show my ID when I vote.

I don't see what all the fuss is about, unless, of course, one side relies on voter fraud, and this law would curb that fraud.

If you have to show your ID to register to vote, then it should not be a problem to show it when you cast the ballot.

An ASU student with a Watauga County driver's license who registered in 2010, say, but who moves to another apartment complex or another dorm before 2012, will also have a problem because the photo i.d. does not show the current address.

This bill would obviously and particularly target young voters for those reasons. Not a small thing.

The fact that you and others don't give a flying f&*k is very telling.

The fact that you and others don't give a flying f&*k is very telling.

Meh, come back and complain when the students actually turn out to vote.

Still, the point about this bill being unnecessary because they already show ID at registration is a good one. I could see ID laws in places like Ohio where people just show up and vote, but like Anonymous says above, NC's voter registration laws seem to be a good prophylactic against fraud all by themselves.

What is wrong with giving a person a voter registration card that has his picture on it when he registers to vote and requiring that he show it when he votes. It only takes a few minutes to go re-register. If it cuts down on fraud by people claiming something wrong, it is worth the inconvenience.

And how exactly does giving a person a photo I.D. when he registers to vote and require that he show it when he votes disenfranchise anyone?

Oliver, because no one is going to give a voter an ID when they register. Where'd you get that?

But come to think of it, that's a damn good idea. Do that, and it's all fine.

Because it is being discussed.

Oliver...You make more sense than anything else said so far on this topic!

The only problem is, most of the lefty leaning wackos don't want to prevent voter fraud!

Under our current system, you can show up at the proper precinct on election day, identify yourself as a neighbor of yours that you know isn't going to vote, answer a very basic question or two (D.O.B., address) and then vote. You can do this as many times as you can find non-voting (or recently deceased) neighbors.

What part of "unconstitutional" don't teh baggers understand? Debate the merits of this misguided scheme all you want, but it's pretty clear that it violates the NC Constitution. Unless they want to pay for the state to contact every registered voter and give him or her a free photo ID (I'm guessing this would cost $100 million to pull off), then the plan is unacceptable.

yes and voter fraud is SUCH a problem, NOT, this is merely another attempt to create difficulties for voters that tend to vote democratic. PERIOD nothing more,

You all are skirting around the real reason this bill exists. There are millions of illegal immigrants who do not pay taxes and should not have a say in any election. Yet you cannot pretend that political parties don't pay illlegals to vote a certain way and send them in van-fulls to add numbers to the poll. It's ridiculous. Even if they are not payed off they will most likely vote for whoever will give them free healthcare and government freebies. Because you don't want to sound racist you reach for obscure numbers of people that may be effected such as "elderly" or "disabled". I'm a college student and I've never had any problems voting so don't even pretend that us college students are in danger. We're smart. We'll figure it out.