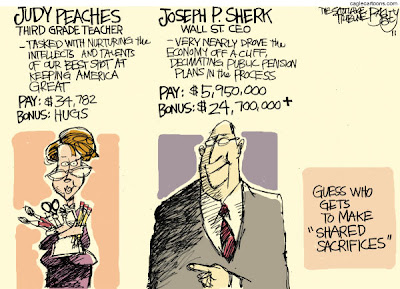 Love the cartoon! The Conservatives over on the conservative site cannot get their head around the morality shown by this cartoon.

At every opportunity conservatives side with protecting the wealthiest and most powerful Americans at the expense of working people.

The cartoon puts it in prospective.

Republicans have a long and distinguished history of voter suppression. They know that if people actually put two and two together about the cause of nearly every negative change in this country in the last fifty years . . . and then voted, they couldn't get elected to dog catcher.

MIKE D, WHERE ARE YOU?

Mike, you promised right after the last election that if the Republicans moved against gay folks, you would write to them (or call them) and tell them to drop it and get back to the business of creating jobs.

Sen. Forrester filed a "so-called" Defense of Marriage bill yesterday. It does several important things. 1) Disregards the fact that marriage is already defined between a man and a woman. 2) Does nothing practical to strengthen the families and marriage. 3) reinforces the vision of some that in America we can "do more divided than ...together."

The poor conservatives use Joe the Plumber logic: they might be rich some day and therefore don't want taxes raised on rich people.