See the new 7th Congressional District, the yellow blotch smack in the center of North Carolina? Former Congressman Mark Walker, who's been running for the US Senate for two years (Burr seat), is thinking of jumping (migrating) into the 7th CD race ... IF he can get the blessing of Donald J. Trump. Walker is reportedly at Mar-a-Lago right now, groveling.

It's complicated. Madison Cawthorn is also at Mar-a-Lago this weekend. 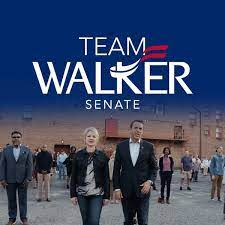 1. The 7th District includes Alamance, Randolph, Chatham, Lee and portions of Wake, Guilford, and Davidson counties (very different from the old 7th, which used to stretch south of Wake to Wilmington). DavesRedistricting.org rates the "Republican lean" in the new 7th at 56.5%.

1.b. Mark Walker doesn't actually live in the new 7th though he wants Trump's blessing to run there. Walker lives in the new 11th. He used to live in and represent the old 6th CD (keep up!), which Democrat Kathy Manning won in 2020 after Walker stepped down to run for Senate. Manning, incidentally, is now double-bunked with Virginia Foxx in the new 11th (which literally gives the finger to Watauga County and stretches east to Greensboro). Foxx has announced that she's running again in CD11. No word yet from Kathy Manning.

2. The new 7th contains much of what used to be the old 13th CD, Ted Budd's perch before he decided to run for Senate as a gun-toting good ole boy and subsequently received the Trump endorsement (staged, incidentally, by Trump with Mark Walker and Pat McCrory at the rally, so very much present for their official snubbing).

3. Cawthorn's a Trump altarboy. Trump invited Cawthorn to participant in the January 6th sedition rally, and he formally endorsed him for reelection to Congress soon after in March.

4. Turn-abouts (the Trumpist "ripple effect"): Cawthorn took it on himself to endorse Mark Walker for Senate before Trump picked Ted Budd. Oops. Cawthorn has actually endorsed a long list of his own worthies, including Virginia Foxx (and see below # 6).

5. It would ease a Madison burden if Walker dropped out of the Senate race. Cawthorn could then endorse Ted Budd and be in synch with DJT.

6. But Walker's jumping over to run in the 7th CD puts him upstream of yet another Madison Cawthorn endorsement (how prideful is this guy?). Bo Hines (of district-shopping fame) had already settled on using the 7th for his novice political tryout, and Cawthorn promptly endorsed him. (Cawthorn seems to believe he's got the royal touch, like the blessing of a saint or for curing scrofula).

7. Over 10 other Republicans have already announced campaigns in the Republican primary upcoming in March: Bo Hines, Kent Keirsey, Jennyfer Bucardo, Lee Haywood, Christian Castelli, Peter Boykin, Marvin Boguslawski and Chad Slotta. Walker will make a lot of activists mad coming in suddenly to this fold, especially if he has Trump's blessing

8. What does Cawthorn say to Trump about Walker? About Bo Hines? And did Cawthorn and Walker bump into each other at the palace of the caesar? And what did they talk about?

9. No Democrat so far has announced a challenge in the new 7th. According to Dave, the "minority" population in the new 7th is over 30%. I bet a lot of those citizens are not even registered to vote.