Another Republican Declares for the CD14 Seat 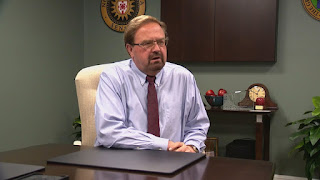 This was the headline in the Asheville Citizen-Times after state Sen. Chuck Edwards announced his candidacy for the CD14 Congressional seat:

And the lede for reporter Joel Burgess's article:

HENDERSONVILLE — Republican state Sen. Chuck Edwards, an outspoken critic of right-wing Rep. Madison Cawthorn "inflaming" Americans against each other before the deadly Jan. 6 Capitol invasion, said he is running for Cawthorn's former seat.

There had been some speculation before Congressman Cawthorn jumped ship to run in the adjacent 13th CD that Sen. Edwards would challenge Cawthorn in the primary, so public had his criticisms of Cawthorn become.

Edwards owns seven McDonald's franchises, so he knows how to push big calories at country people. So of course he mentioned growing up in the mountains "carrying a squirrel gun."

Posted by J.W. Williamson at 12/01/2021 09:40:00 AM
Email ThisBlogThis!Share to TwitterShare to FacebookShare to Pinterest
Labels: Chuck Edwards, Madison Cawthorn