So last night in Greenville, Donald Trump endorsed Congressman Ted Budd for Burr's open US Senate seat. Then he destroyed Pat McCrory. “You can’t pick people who have already lost two races.” Everybody in that room knew he was referring to former Guv Pat, who lost one statewide race for governor in 2010 and a second, his failure to win reelection in 2016. Guess who was sitting right there in that room and heard Trump trash him? McCrory may not have yelped out loud but he may have turned a bitter shade of Republican red.

After the event, McCrory tried to fight back in an impromptu press conference at the back of the convention hall. Quoting Brian Murphy and Will Doran (with impertinent notes added):

McCrory said he was “disappointed” in Trump’s endorsement of Budd, calling the congressman “a Washington insider who has done more to oppose the Trump agenda than anyone in the race”....

[Really? McCrory wants to claim that Budd is some kind of McCain in the House? Get outta here!]

“The president got some bad advice and you could tell by the immediate reaction of the audience, which was no reaction to the individual he endorsed” ....

[McCrory was alluding to what was surely many startled faces in the audience, because just hours earlier, ex-Congressman Mark Walker had won the straw poll. Some 44% of the 1,200 delegates to the 2021 NC Republican Convention preferred Walker -- 29% for Budd, 18% for McCrory.] 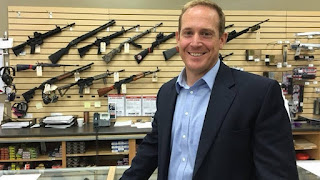 McCrory, who met with Trump after his 2016 election about a job in the administration, said that he “never sought an endorsement from anyone.” ...

[Trump had said in his speech that someone he didn't endorse lobbied him for an endorsement. Trump also didn't give McCrory a job in his administration.]

As for having lost elections, something he has in common with Trump, McCrory said, “We all live in glass houses.”

McCrory pointed to polls that show him with a large lead in the primary. He said North Carolina picks its own candidates.

We all live in glass houses? The difference for you, Fella, is that Trump's glass is bulletproof while yours is like cellophane.
I think we just saw last night a potential political comeback go past its shelf-life.
Posted by J.W. Williamson at 6/06/2021 09:03:00 AM
Email ThisBlogThis!Share to TwitterShare to FacebookShare to Pinterest
Labels: Donald Trump, Mark Walker, Pat McCrory, Ted Budd