Bo Hines and the Wheel of Fortune

Bo Hines, the Madison Cawthorn wannabe who had announced a Republican primary campaign in 2022 to take out Virginia Foxx, has reassessed his chances of taking out Virginia Foxx and his options for a different district to run in, perhaps one without a fellow Republican as incumbent, and he's decided that the 13th CD, where Ted Budd is stepping down to run for US Senate, looks mighty promising.

The map below was in effect last fall. It won't be in effect in 2022, as the Republican majority in the NC General Assembly will be redistricting to squeeze in a 14th CD, the result of population growth. Bo Hines currently doesn't live in the 13th; he doesn't currently live in the 5th either, as he's a student at Wake Forest in Forsyth. It's not illegal to run to represent a US House district where you don't live, but it's rarely a successful stretch.

We regret that Virginia Foxx won't have the most interesting primary of her nine terms in the US House. Bo Hines might have been stronger than most of the leftovers that Foxx faced in her past primaries. 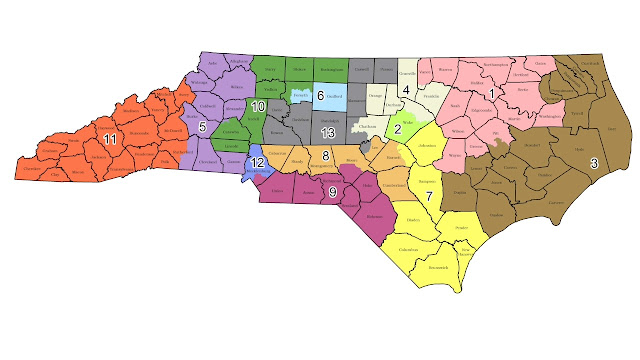 Posted by J.W. Williamson at 5/10/2021 07:25:00 AM
Email ThisBlogThis!Share to TwitterShare to FacebookShare to Pinterest
Labels: Bo Hines, redistricting, Virginia Foxx