A couple of days ago we speculated about what was going on at Mar-a-Lago between Mark Walker, Madison Cawthorn, and DJT. Turns out that political novice Bo Hines was there also, and between the four of them, they've divvied up Congressional seats to keep out of each other's way. (Thanks to Jeffrey Billman at The Primer.)

Bo Hines is migrating his political aspirations (yet again!) from the 7th CD to the 4th, where there's already a bunch of announced Republican candidates, including NC House member John Szoka. (Congrats, John! The Trumpists now consider you toast.)

With Bo Hines gone, Mark Walker has a clearer field for the 7th CD. He, with Trump's blessing, intends to elbow aside another clutch of lesser-known Republicans.

Michelle Woodhouse gets the Cawthorn/Trump nod to take the 14th CD away from both Chuck Edwards and Bruce O'Connell. (Memo to Edwards and O'Connell: toast and toast.)

Young Madison is taking the credit for this master plan, seconded by the ineffable endorsements of Trump. 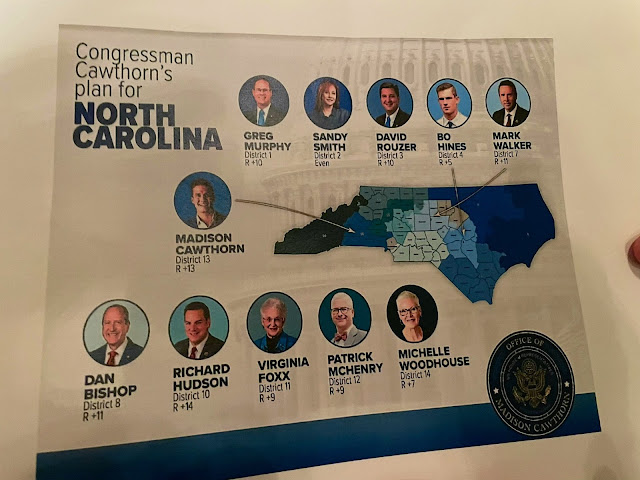