If You Dine With the Devil, Better Use a Long Spoon

Jeff Roe is a Republican political consultant who guided Glenn Youngkin's recent successful campaign to become Virginia's governor. Roe had a fraught history with Donald Trump going back to the 2016 Republican primary when he was working for the Ted Cruz for President campaign. He advised Youngkin to enthusiastically embrace Trump during the primary and then get the hell away from him for the general election -- which actually worked and which majorly pissed off DJT.
The Washington Post recently reported that Roe was forced to get himself to Mar-a-Lago to smooth Trump's ruffled feathers. Trump was said to believe that Roe had "belittled" his role in Youngkin's win. And it's true enough that "after winning the GOP nomination and Trump’s endorsement, Youngkin stopped dropping Trump’s name."
Trump had told the “John Fredericks Radio Show” ("America's Godzilla of the TRUTH!" which broadcasts out of Goochland, Va.) that “the only guys that win are the guys that embrace the MAGA movement. When they try to go down a railroad track … ‘Oh, yeah, love Trump. Love Trump. Okay, let’s go, next subject.’ When they do that, nobody, they don’t — they never win. They never win. They have to embrace it.” 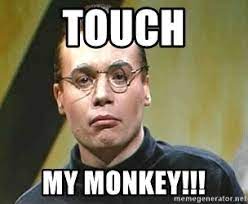 Youngkin was still walking that tightrope when he gave his first post-election interview to Fox News's Tucker Carlson (the faint praise for an unnamed DJT got noticed): “We had help from everybody. We had a huge support from the Latino community. You know, the president made a call and asked everybody to get out and vote. And we had big turnout in southwest Virginia. We saw parents turn out.”
When you have an ego as large as Trump's and you're mentioned after the Latinos -- why, boy, you got some groveling to do!

"Roe told others privately that he did not want Trump to visit the state and that it would be harmful to Youngkin, according to a political operative who spoke with Roe about it. Trump told Roe that he would like to see his supporters publicly given more credit for the victory, two people familiar with the meeting said. Trump called Youngkin several times to give him advice in the race and talk about the numbers in the state...."
Youngkin's win, without throwing himself into Trump's arms, is supposed to signal that Trump's influence in the Republican Party is fading. That's a fiercely debated topic. But when you have to make your pilgrimage to Mar-a-Lago to kiss the ring, you're not a free man.
Posted by J.W. Williamson at 12/19/2021 09:24:00 AM
Email ThisBlogThis!Share to TwitterShare to FacebookShare to Pinterest
Labels: Donald Trump, Glenn Youngkin, Jeff Roe, Virginia-State of