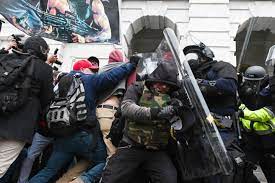 Almost a year ago a large crowd of stirred-up Trumpists stormed the U.S. Capitol. That assault caused at least $1.5 million in building damages, led to the deaths of five people, and injured scores of police.

Reporter Michael Gordon has done the leg-work tracing where the charges against 14 North Carolinians currently stand:

Brad Bennett -- former Mecklenburg Co. resident, wellness coach, and survivalist. He's charged with six crimes, one a felony that could send him to prison.

Aiden Bilyard -- from Cary. "Photos show the 19-year-old shooting chemical bear spray at a line of police officers and later using a baseball bat to break out a Capitol window, which he and scores of other rioters used as a portal to the Senate side of the building."

Grayson Sherrill -- from Cherryville. Now accused in an amended complaint of several acts of felony violence inside the Capitol, including assaulting a police officer with a metal pole.

Laura Steele and Charles Donohoe -- named in a new Dec. 14 criminal complaint filed by the District of Columbia against two paramilitary groups (Oath Keepers and Proud Boys) who the government says helped plan the Capitol siege. Steele is a former police officer accused of being part of a multi-state conspiracy by the Oath Keepers to storm the Capitol. She's charged with at least one felony. Donohoe is "an alleged member of the right-wing Proud Boys who federal prosecutors say helped plan and direct the group’s activities during the mob attack."

Matthew Wood -- from Reidsville, "who originally told the FBI that he entered the Capitol only to avoid being trampled, but was caught on camera urging the mob to attack police."

Lewis Cantwell -- from Sylva, charged with six crimes and, "according to court records, appears to have backed off from entering a guilty plea."

Chris and Virginia Spencer -- from Pilot Mountain. The only husband-wife team of defendants. Virginia Spencer has pleaded guilty to a single misdemeanor charge and is to be sentenced Jan. 7. Chris Spencer has pleaded not guilty. "Normally, a misdemeanor charge in the Capitol cases has not carried a prison sentence. But in a December sentencing memorandum to Virginia Spencer’s judge, prosecutors noted for the first time that the Spencers brought one of their children, a 14-year-old, to the riot. The family took part in one of the first waves that stormed the building, briefly entered House Speaker Nancy Pelosi’s office suite, and joined another mob that massed outside the House chamber when the representatives were still trapped inside, Assistant U.S. Attorney Douglas Collyer wrote. Virginia Spencer’s 'participation in a riot… combined with the defendant involving her minor child renders a sentence of incarceration both necessary and appropriate in this case.' ”

Posted by J.W. Williamson at 12/28/2021 09:25:00 AM
Email ThisBlogThis!Share to TwitterShare to FacebookShare to Pinterest
Labels: Trumpism