The Family That Did So Much to Destroy Appalachia 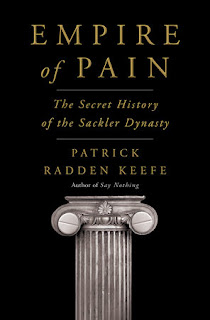 I just finished the first of my Christmas books, "Empire of Pain" by Patrick Radden Keefe, and I'm a little agitated by the confirmation that the Sacklers of OxyContin fame have indeed "gotten away with it." None of that large connected clan of three generations of pill pushers -- none of them have ever been materially punished for their part in literally creating the "opioid epidemic," while benefitting outrageously from the human destruction.
Okay, footnote: The Attorney General of Massachusetts, Maura Healey, named Purdue Pharma and individual Sacklers in a civil complaint in June 2018 that ran to over 270 pages, but the Sacklers successfully blocked her by putting Purdue Pharma into bankruptcy. So I incidentally learned -- surprise! -- that when a company is in bankruptcy, all other suits and complaints against it are put on hold. I didn't know that. But it's key to why the Sacklers haven't paid personally yet for their ethical and moral crimes.
However, they have begun to pay in humiliation. Some of the museums that they funded lavishly and which put their names prominently on display, like the Sackler Wing at the Met, have been chiseling those names off its granite. Some cultural institutions, which in the past have received millions in philanthropic money from various Sacklers, have now begun to say "no thanks, cause we don't want to be associated with you people any more." The Sackler's poor, exploited, milked company, Purdue Pharma, suffered plenty. It's been charged and fined as a corporate entity and some of its executives (who were most assuredly not Sacklers) got sentenced, and it's now a shell in bankruptcy court. None of that destruction touched the Sacklers personally, nor the bulk of their money. 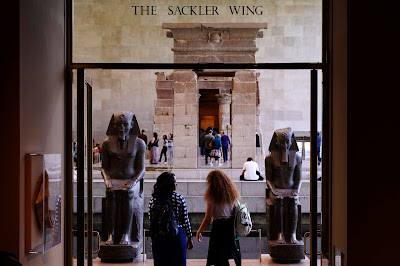 Here's the thing that allowed the Sacklers to become celebrated philanthropists: For many, many years, the elite crowd in NYC and the mavens of major institutions, like the Met, Harvard University, Oxford, the Louvre -- they simply didn't know (and perhaps didn't want to know) how the Sacklers were making their money. The family had always been secretive. They obscured the connection between themselves and the marketing of pills --  especially after OxyContin became a hot topic.
The Sacklers have evaded accountability through a combination of ruthless tactics, highly paid lawyers, a willingness to go after anyone publicly complaining, and fat influence at the highest levels of government. I think it's fair to say that the Sacklers in the now three generations of the family effectively corrupted the regulatory obligations of both the FDA and the Department of Justice. Family bosses knew how to compromise a federal regulator by offering him/her a desk and a big salary at Purdue if they ever got tired of low-paid government work. At the right moment, the Sacklers knew key people in the Department of Justice (particularly during both the George W. Bush and Trump administrations), when Justice should have been seeking justice for false advertising and various types of fraud.
Instead, billions (that's no exaggeration) were going directly into the pockets of the Sacklers (and into off-shore accounts where the government can't reach it). Profit from OxyContin soon passed $3 billion a year. Meanwhile, for the overdosed dead, the Sacklers showed little sympathy. Drug addicts were the "scum of the earth" who had only themselves to blame for their addictions.
Rep. Jim Cooper (D-Tenn.) a most mild-mannered, bowtie-equipped member of Congress, said this to David and Kathe Sackler, when they testified in a Congressional hearing titled "The Role of Purdue Pharma and the Sackler Family in the Opioid Epidemic":

"Watching you testify makes my blood boil. I'm not sure that I'm aware of any family in America that's more evil than yours."

Reading Keefe's book brings me to the same place.

In that Congressional hearing, the two Sacklers (Kathe representing the "A Side," descendants of the middle of the original three brothers who started the company; David representing the corporate "B Side," descendants of the youngest of the three original Sacklers) had just told Rep. Cooper and the other members of the committee, in sometimes testy tones and always with a billionaire's aplomb, an inability to read the room, that they did not know that OxyContin was addictive, that they had not and never would do anything wrong in the making and marketing of any medication, and why are you people persecuting the inventors of a medical miracle for pain control?

Keefe reports opinions that Richard Sackler, the inventor and prime marketer of OxyContin, simply lacked empathy. Had no understanding of and hence no sympathy for the suffering of others. If you're looking for a mortal flaw in not just Richard Sackler but in the whole corporate enterprise, "lack of empathy" will suffice. (We've had plenty of experience very recently with that type of human being.)

Hulu's "Dopesick" First Made Me Curious About the Sacklers 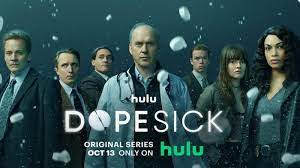 I really wanted to read "Empire of Pain" to learn about Richard Sackler in particular. I was riveted by actor Michael Stuhlbarg's portrayal of him in the Hulu series "Dopesick." Very good series. Focuses on the hills of Appalachia in Virginia, which was indeed the birthplace of Victim Zero, the first recorded death from OxyContin overdose. That drug (and then heroin, when there was no Oxy) ravaged Appalachia starting in 1996, and it's only fitting that "Dopesick" the series chose locations in Clifton Forge and other Virginia small towns for filming. The Virginia Museum of Fine Arts in Richmond served as the famous "Sackler Wing" at the Metropolitan Museum in NYC. Robert Gipe, a brilliant comic writer out of Harlan County, served as a script advisor. "He vetted every single detail," said writer Beth Macey, who had published the book "Dopesick." She signed on to write and help produce the Hulu series and wisely set aside her own bestseller to write a much broader script that went way beyond the local reportage that she had done for the Roanoke Times. Keefe's "Empire of Pain" must have supplied much of the Sackler history that Macy used in her script. All the stuff about those contentious Purdue board meetings, with the A Side and the B Side sniping at one another from opposite ends of a very long table -- all that came out of Keefe's book.

After watching the Hulu series (with Stuhlbarg's malign mystery as Richard Sackler), I got my hands on Macy's bestseller first (hattip JDG), hoping she was the source about the Sacklers. But, no, Macy's book is strictly reportage about the people of southwest Virginia touched by the opioid epidemic, particularly the families of the dead. In the TV series, the Michael Keaton character (the doctor who himself gets addicted) and the young woman coal miner and her family -- those are made up amalgamations of many people Macy had known, or known about. Meanwhile the Sacklers barely get a mention, nor do the various government lawyers dogging them and amassing a case against them, like the lawyers out of the Western District of Virginia and the FDA official played by Rosario Dawson. Macy's book goes into none of that, but Patrick Keefe does.

Posted by J.W. Williamson at 12/31/2021 01:12:00 PM
Email ThisBlogThis!Share to TwitterShare to FacebookShare to Pinterest
Labels: Appalachia