What the Republicans Have To Choose From in NCH109 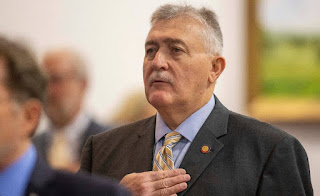 One Donnie Loftis got appointed to the Gaston County seat (Dist. 109) in the last week of October to replace Rep. Dana Bumgardner who had passed away. WRAL immediately outed Loftis as enthusiastically attending Trump's nullify-the-election/insurrection on January 6th, but he said he absolutely, positively didn't enter the Capitol building (though he was close enough to catch teargas in the face). He bused with other fiery hot patriots to D.C., and on the bus back home he posted this on Facebook:

“I got gassed three times and was at the entrance when they breached the door. I spoke to many service members, and we all agreed that we didn’t want to be there, but we had no other choice. They don’t get it that they work for us. And I mean that in a respectful way.” (Source: Gaston Gazette)

A 30-year Army veteran with combat experience, Loftis served two short terms -- separated by years -- as a Gaston County Commissioner. He last held office in 2012. He could never gain a second consecutive term. Last time he tried, he got beaten in the primary. He also tried twice to win the NCH109 seat but couldn't get through either the 2004 or the 2012 primary. Doesn't seem very popular in Gaston County. So how did he get appointed? He was the pick of the Gaston County Republican Executive Committee, "after considering the nomination of three individuals and through two rounds of voting" (Gaston.NC.gop). Any more detail than that will take snitches inside (but I strongly suspect that old friends and relatives of the deceased Dana Bumgardner were not happy with the Loftis appointment ... see below).

He was a very public Trumpist in Gaston County before he ever thought of storming the Capitol. Somehow Loftis got to be chair of the board of directors of CaroMont Health Inc., a very large regional hospital chain, and was forced to resign in 2020 when his Facebook re-posts of COVID-19 conspiracy theories got into the public bloodstream, along with his calling Gov. Cooper a tyrant for that initial stay-at-home order. The Gaston Gazette says he got himself reappointed to the board of Caro-Mont and is still serving, but CaroMont's website does not list him

When Donnie Loftis was presented in the House chamber on the Monday evening of November 1st, all the Democrats in the chamber walked out rather than attend his swearing in.

The Loftis Challengers (so far) 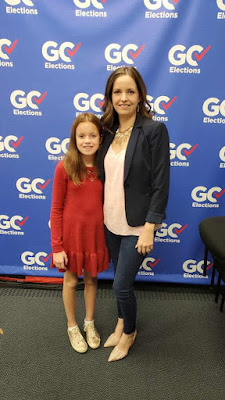 Lauren Bumgardner Currens, the daughter of the late Rep. Bumgardner, has been the number two in the Gaston County GOP since 2015, and she was one of the three nominees for appointment to the seat. Her Twitter account defines her with stark gender norms -- "Mom. Wife. Candidate for NC House 109" -- but she's no country mouse -- more country club. She posed with House Speaker Tim Moore when she served a year as a house legislative aide, and I am betting she's banking on the family legacy. [Apologies! Just realized that I left unsaid the obvious thing: Lauren is the former rep's daughter.]

Bumgardner has left virtually no trace on social media except for the Twitter feed and a very thin Facebook page.

But her filing statement ain't so attractive:

"The message coming from the citizens of Gaston County to the Far-Left Democrats is clear. Stop indoctrinating our children in schools. Stop tearing down statues of our Founding Fathers. Stop overtaxing our families. Stop hating America."

That's the same bullying posture that all the Trump soldiers now ape. How is she different from Loftis? She looks better and maybe just missed the bus. 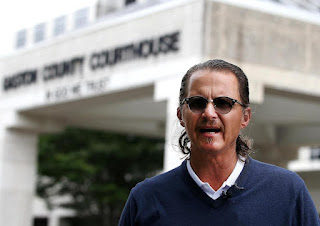 Ronnie Worley is currently serving his second four-year term on the Gaston County Commission. He was the third person initially nominated to replace Bumgardner. Worley is a former mayor of Cramerton and a retired state Highway Patrol trooper. He doesn't sound crazy:

“Government at every level is failing the average citizen and average family,” Worley said.

Compared to Loftis and Bumgardner Currens, that's soft soap. No grabbing for the easiest divisive one-liners. No apparent instinct for bullying. Sure, there's the "no COVID mandate" boilerplate, but it's under- rather than overstated.
The most telling piece of evidence about Worley came following the Charlottesville racist rioting in 2017 when local Black leaders requested the Gaston commissioners to remove the Confederate statue at the entrance to the county courthouse. At first, Worley and his fellow commissioners took no action. Then later, this:

"Maybe I didn’t have the political courage to say, ‘Yeah, we need to move it,’ although I probably knew then," Worley said....

"So I’m thinking well, how would a Jewish person feel if they had to look at a swastika? Maybe Black Americans feel the same way looking at this monument to the Confederacy and what was a symbol of hate to that population," he said.

Worley, a retired state trooper and former mayor of Cramerton, says his conviction came from not only the current national upheaval over race but from talks with local Black people who say the symbolism makes them skeptical about the justice system.

Good God. This man probably doesn't have a prayer in the Republican primary. He made the about-face on the Confederate soldier monument in July 2020, way after all filing for a primary was completed. He had no primary opponent and no general election opponent in 2020. Will the MAGA crowd now get delayed revenge for his apparent race treason?
Posted by J.W. Williamson at 12/15/2021 12:36:00 PM
Email ThisBlogThis!Share to TwitterShare to FacebookShare to Pinterest
Labels: Donnie Loftis, Gaston County, Lauren Bumgardner Currens, Ronnie Worley, Trumpism