Even Mark Meadows Thought It Was Hare-Brained? 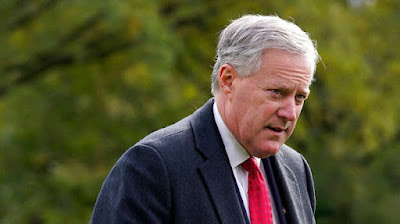 The January 6th investigating committee has announced that it plans to seek contempt of Congress charges against former Trump Chief of Staff Mark Meadows. At the end of the NYTimes article detailing the evidence against Meadows are four paragraphs about a most interesting additional piece of magic that turned up as an attachment to one of Mark Meadows' emails:

...a 38-page PowerPoint document containing plans to overturn Mr. Biden’s victory. That document, which Mr. Meadows provided to the committee, urged Mr. Trump to declare a national emergency to cling to power and included an unsupported claim that China and Venezuela had obtained control over the voting infrastructure in a majority of states.

Mr. Meadows’s lawyer has said he provided the document to the committee because he had received it by email and did nothing with it.

Phil Waldron, a retired Army colonel who has promoted false claims of election fraud, said that he had circulated the document among Mr. Trump’s allies and among lawmakers on Capitol Hill in the days before the mob violence. Mr. Giuliani has identified Mr. Waldron as a source of information for his legal campaign.

Mr. Waldron told The Washington Post that he had visited the White House several times after last year’s election and spoken with Mr. Meadows “maybe eight to 10 times.”

Meadows certainly knew plenty about all sorts of schemes, but according to his lawyer, he "did nothing with it" (with that particular PowerPoint, at least). If we believe that denial ... and I think I'm inclined to believe it.

Posted by J.W. Williamson at 12/13/2021 11:16:00 AM
Email ThisBlogThis!Share to TwitterShare to FacebookShare to Pinterest
Labels: Donald Trump, Mark Meadows

I guess the White House staff don't take an oath to "support and defend the Constitution of the United States against all enemies, foreign and domestic"; but Phil Waldron (and DJT himself) certainly did.