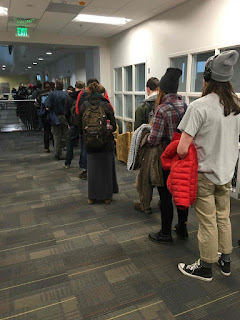 (Can't look at that chart without marveling over Yadkin's showing. What's going on in Yadkin, where you could hardly find a Democrat a few years ago?)

Meanwhile, in Watauga County, overall (all party) early voting turnout was down in 2020 (5,915 total votes cast) compared to early voting in the 2016 primary (7,215 total votes). Turnout by party affiliation was also down: Democrats down 17% from 2016; Unaffiliateds down 24%; and Republicans down a whopping 52% (whopping considering all the Republican primary races on their party's ballot). In fact, the overall voter turnout in Watauga for early voting was down primarily because some 800 Republicans who showed up in 2016 didn't bother to show up in 2020 -- at least not during early voting. Maybe they all were waiting for tomorrow.

Not surprised at the low repub turnout as the Main Event is the Presidential race, where Trump owns it.

As for the down ballot races, I think most repubs would be happy with just about any of the candidates, so long as they beat the opposing dem.

2016 had high interest in both the Dem and Rep primaries. This year, not so much. Repubs may be fanatic for Trump but don't really see any reason to vote in a primary where he has no competition.