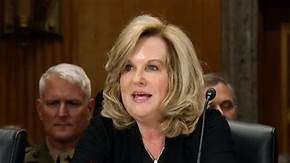 According to reporting in the WashPost, Cabaniss found herself and her agency sidelined by the White House budget office, and as human resources manager of the federal workforce, Cabaniss was unable to communicate clear, timely messages to agency managers on how they should respond to the growing public health threat.

"Cabaniss, 58, has deep experience with federal personnel issues and was respected by her staff and by Republicans and Democrats on Capitol Hill, where she served for two decades as a top Senate aide overseeing civil service issues. Since her Senate confirmation in October, Cabaniss was viewed as restoring morale to the agency after a tumultuous two years of shifting missions and leadership."

Posted by J.W. Williamson at 3/18/2020 09:34:00 AM
Email ThisBlogThis!Share to TwitterShare to FacebookShare to Pinterest
Labels: Dale Cabaniss, Donald Trump