Flattery is everything to Twitterman. Flattery and TV ratings, which are really the same thing. 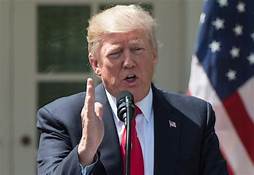 In yesterday's brag session, Trump said the viewership for his daily virus briefings "are like ‘Monday Night Football’ ratings.” They've taken the place of his MAGA rallies and have the same purpose, puffing up his lordship while insulting his perceived enemies. And of course bashing the press. “I read that CNN doesn’t want to cover them [the daily briefings], except that they can’t help it because their ratings are so high,” Trump said.

He continues to lie, even when the lie is obvious and there's indisputable proof that he's lying. PBS NewsHour reporter Yamiche Alcindor stood to ask a couple of questions, but couldn't get the first sentence out before Trump interrupted her:


“Mr. President, I have two questions,” she said. “The first is you’ve said repeatedly that you think that some of the equipment that governors are requesting they don’t actually need. You said New York might not need 30,000 …”


“I didn’t say that,” Trump interrupted.

Maybe these daily briefings are improving Trump's poll ratings for reelection. That's what some people are saying. And also suggesting that we shouldn't be attacking Trump for his ineptitude and stone-cold stupidity. (Oops. Did it again.) I dunno. We have the worst possible president at the worst possible time, and I'm too old and set in my ways to ignore that fact.

Posted by J.W. Williamson at 3/30/2020 08:50:00 AM
Email ThisBlogThis!Share to TwitterShare to FacebookShare to Pinterest
Labels: Donald Trump