In Outing a Bribery Scheme, Mike Causey Is a Credit to His Office


Read WRAL reporter Travis Fain's wrap-up of the Greg Lindberg bribery case down in Durham. Read it and weep. Because billionaire Greg Lindberg is one of those "masters of the universe" who are single-handedly capable of shoving enough money at politicians to cast an ethical cloud over whole departments of government. For those public officials who accepted great heaps of his cash, they raise suspicions about personal integrity and suggest once again that the love/lure of money is the root of all evil.

Lindberg gave money to both the Republican and the Democratic parties. He gave money to Democratic Senator Chuck Schumer as well as to Speaker of the House Paul Ryan. He gave 6 figures to Tim Moore, for his House Republican Caucus fund. He gave $50,000 to state Senator Wesley Meredith who was introducing an insurance law rewrite in the General Assembly that would have advantaged Lindberg (the law went nowhere). Most striking of all, Lindberg gave over $2 million to support Dan Forest for governor, a "strategic" expenditure in case Forest should become governor.

Lindberg isn't the first nor will he be the last, to grow his tendrils everywhere, from Raleigh power-centers to Mugstomp-on-the-Potomac. We've always had these guys who respect no bounds to get what they want. And elected officials with their hands out. 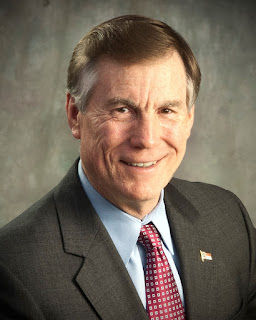 Except for NC Commissioner of Insurance Mike Causey. (You can read about what Lindberg wanted out of the Insurance Commissioner on your own. I'm not going to summarize all that here. It's beside the point anyway.) Mike Causey, Republican, cooperated with the FBI to expose a bribery scandal involving both billionaire Lindberg and Robin Hayes, Chair of the NCGOP. Mike Causey resisted the attempted bribery and exposed it all. Mike Causey is a civic hero.

Travis Fain found evidence that the Lindberg gang thought Commissioner Causey was also "dense," a kind of Gomer Pyle lame-brain. That Causey always seemed to agree to their quid pro quos and then dragged his feet and appeared to forget his assigned duties and never delivered what Lindberg thought he'd agreed to. All the time Causey was playing Lindberg, wearing at various times both hidden microphones and videocameras and gathering the evidence that led to Lindberg's conviction last Thursday (March 5). Robin Hayes had already pled guilty for participating and is awaiting sentencing.

Some North Carolina Democrats get tarred with the same Lindberg tar. Nobody's accused them of wrongdoing, but it's not a good look. What's documented is some $750,000 that Lindberg gave to the NC Democratic Party in 2018 while it was chaired by Wayne Goodwin, the previous Insurance Commissioner. In fact, according to Fain, Goodwin was Lindberg's "first." Lindberg had spent "more than $340,000 between Goodwin's campaign [to become Insurance Commissioner] and a separate political action committee that supported his re-election."

That's what Fain documents. What's undocumented is the money Lindberg gave to "dark money" groups, of which there was apparently a generous helping given to both sides. Including an unspecified amount to a 501(c)(4) group supporting Gov. Cooper's 2016 campaign.

What set off the whole bribery scene?

Goodwin had given the Lindberg insurance companies an advantage that appears to have been out of the ordinary. Causey's department after January of 2017 began reversing that policy. Lindberg was putting pressure on Causey to go easy on him.

Under Insurance Commissioner Wayne Goodwin, the department allowed Lindberg's insurance companies to keep investing up to 40% of their assets, cash from policyholder premiums, into other companies that Lindberg owns. When Mike Causey took over as Insurance Commissioner, his team, led in part by Jackie Obusek, a senior deputy commissioner, insisted on "unwinding" what Goodwin had given Lindberg -- lowering that 40% and thus Lindberg's control over the companies' cash.

Lindberg wanted Jackie Obusek fired. That's what he was willing to buy from Mike Causey, along with of course a more generally lenient regulatory regime overseeing his activities.