In a Dark Time, the Eye Begins To See


Hypothetical: What would it be like to have the worst possible president in office during a global pandemic? 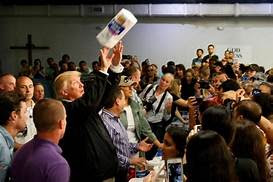 Unfortunately for us and our republic, it ain't hypothetical.


In a new interview with Science magazine, Dr. Anthony Fauci, the director of the National Institute of Allergy and Infectious Diseases, said he works behind the scenes trying to keep President Trump’s statements about the pandemic fact-based. Asked about things that “are being said that aren’t true and aren’t factual” Fauci said he tells “the appropriate people” and they speak to Trump, “be careful about this and don’t say that. But I can’t jump in front of the microphone and push him down. OK, he said it. Let’s try and get it corrected for the next time.” Fauci also gave a “no comment” when asked whether he’d been reprimanded for covering his face when Trump referred to the “deep State Department.”

Goddamn our luck at having this guy in the White House at this time.

Posted by J.W. Williamson at 3/23/2020 08:25:00 AM
Email ThisBlogThis!Share to TwitterShare to FacebookShare to Pinterest
Labels: Anthony Fauci, Donald Trump

Sadly, "luck" isn't the reason we have this guy in the WH.

No, we have him in the White House because we- the American people - elected him in accordance with our country's constitution. Deal with it.