Maybe the Graveyard Is Whistling Past Us


I shouldn't write anything until I see results tonight from 14 states. I shouldn't. I won't. I will. 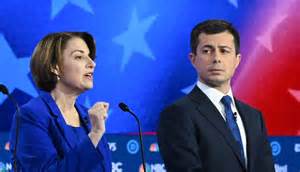 The political party to which I belong is so goddamn fearful of the threatened blossoming of its own purported values that it is getting itself ready and psyched up to snatch the presidential nomination from Bernie Sanders, if it should come to that.

I posted results from a poll that showed a fear of "socialism" ranking higher than the fear of death among a significant portion of Baby Boomers born between 1946 and 1964. The very possibility of either a President Sanders or a President Warren (either!) rattles their timbers, though they are themselves prime beneficiaries of the very socialism they fear. The logic of that shivers my timbers.

Is there a psychologist in the house? I also think the Democratic leadership -- office-holders, Super Delegates et al. -- are mainly fearful of what it might mean to them personally if a popular revolt broke out in Democratic ranks for structural change to the levers of power -- scattering the money-changers and driving them from the temple. Oh my Gawd! Democratic pharisees are kind of in league with the money-changers, and get their money from them, but how to turn back a revolt from below? Oh, yeah. The pusher for change must be a "socialist." A dreaded socialist. Actually, probably a Commie.

Why, what would happen, O my brethren, if equality actually broke out? Expensive furniture thrown from high windows, torches in the street, hot tar and a big basket of feathers? Bankers and corrupt corporations, ridden out on rails?

It's a turnoff, the fear of the Democratic establishment amplified by cable TV (which is a calvacade of corporations, after all). It's not entirely that Joe is old and seems it. It's that he's backward (or "moderate," if you insist). Joe Biden's actual promise is to take us back in time to an Obama/Biden "decent" era, which was actually to me the embodiment of a hesitant, good-ish gradualism that took pains not to piss off Wall Street. That ain't the restoration to me.

Fear of socialism among the age group most set to receive its benefits through Social Security and Medicare -- the blessings of help for the sometime helpless, delivered via social contract which required -- or should require -- the cooperation of the rich -- Failure to recognize the irony amounts to political malfeasance. I'm embarrassed for my immature juniors, the Boomers, and for the Democratic establishment.