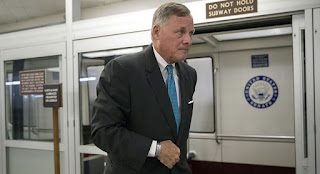 A law called the Stock Act prohibits members of Congress, their staffers, and other federal officials from trading on insider information obtained from their government work. "No one has been charged under the Stock Act since its passage in 2012, and some legal experts consider it a difficult statute under which to file criminal charges" (Devlin Barrett).

According to the WashPost, Senator Richard Burr is under investigation by the Justice Department for possible violation of the Stock Act. As chair of the Senate Intelligence Committee, Burr received frequent briefings on the threat of the Coronavirus. In mid-February, Burr sold 33 stocks including shares in some industries that were later hit hardest by the pandemic’s rapid spread throughout the United States, including hotels, restaurants, shipping, drug manufacturing, and health care.

Melanie Sloan, a senior adviser to the watchdog group American Oversight, said that Burr “cannot be questioned about what he learned regarding the coming pandemic in his role as chair of the Intelligence Committee, making prosecution improbable.” She said the Senate Ethics Committee, however, has jurisdiction over the issue and if it finds Burr traded on inside information, could recommend his expulsion.

That ain't gonna happen. And it's highly unlikely that the Justice Department under William Barr will find anything to indict. However, it's not a good look for Republicans in power. Even the loud-mouthed partisan Matt Gaetz (R-Fla.) has demanded that Senate Majority Leader Mitch McConnell strip Burr of his committee chairmanship. “Republicans need to do a better job cleaning our own house,” Gaetz wrote.

Posted by J.W. Williamson at 3/31/2020 09:21:00 AM
Email ThisBlogThis!Share to TwitterShare to FacebookShare to Pinterest
Labels: Richard Burr