Surprised Fauci Has Lasted This Long 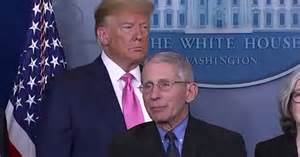 Testing for the virus is still woefully inadequate, personal protection gear for medical workers is still alarmingly scarce, and the Trump true-believers are determined to see the only true scientist on the stage with Trump at the daily brag-sessions, Dr. Anthony Fauci, is discredited as a "deep-state" Hillary Clinton stooge.

Twitterman appears all too ready to separate himself from science because, after all, "I have a feeling," and those prepared to bow down to that man's feelings, may they somehow keep safe, even though and after all, the whole thing is a Democratic hoax, ain't it?

Trump insisted to Hannity on Fox yesterday that there was “no way” he would cancel the Republican National Convention, which is scheduled for August in Charlotte.

Y'all go do that. And have yourselves a big old time. The rest of us will keep at least six feet away.

Posted by J.W. Williamson at 3/27/2020 08:19:00 AM
Email ThisBlogThis!Share to TwitterShare to FacebookShare to Pinterest
Labels: Anthony Fauci, Donald Trump

Dr. Foxx, of course, vehemently argues (last newsletter) that the Democrats unreasonably held up the stimulus bill, conveniently forgetting her own party's House member significantly added to delay, and silently being pissed off that we're giving away so much money to people who are irresponsible and will only become immediately comfortable with a government dole. Clearly, it's the biggest corporations, especially in the travel industry, who need the money, and we can depend on them to help us all out.