You and Your Goddamn Money 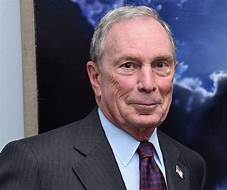 The following news came via Michael Scherer in the WashPost yesterday:


Former New York mayor and full-time billionaire Mike Bloomberg has decided to form an independent expenditure campaign that will absorb hundreds of his presidential campaign staffers already on the ground in six swing states -- Wisconsin, Michigan, Pennsylvania, Arizona, Florida, and North Carolina -- to work to elect Joe Biden this fall.

Maybe this is what those North Carolina Democratic office-holders were promised when they endorsed Bloomberg for president last month. Maybe they're jumping up and down right now with glee -- for lordy lordy, Democrats will have their own oligarch to fight the oligarch. Maybe Democratic Party officials and Democratic political operatives are similarly juiced for their prospects this year, visions of Bloomberg dollars and field staff dancing in their heads.

But it's the apocalypse, isn't it? Isn't it the Dark Night of our political soul?

Put the stake in the whole idea of reforming a political system that allows rich people all the power. Place that oaken stake over its heart and drive it down hard. Forget reform. Money runs politics, money rules the Republic. And sad to say, Democrats have become ever bit as obsequious to the filthy rich as their Republican counterparts.

If only money didn't also mostly corrupt. (Okay okay I'm willing to admit that there are also statesmen in our history who stood for righteous justice and would not kowtow. They're in the minority.) If only money didn't bend the moral will. The hand is out, and the hand that places money in that hand also wants something tangible, at the very least a stability in the system that guarantees their continuing profit. People with money don't like threats to their state of play. They'll use the politicians they've bought to guard their interests. The more the money, the more the corrosion of principles, both civic and moral.

An independent expenditure group, like Bloomberg is planning for North Carolina, is not allowed to coordinate with candidate campaigns. But they wouldn't exist without a tacit mind-bond with the candidate they're supporting. That's just logic. Since they must report their donors -- unlike the far more sinister dark groups with the hidden connections, like Mitch McConnell's Faith and Power PAC --independent expenditure orgs are less objectionable, maybe, and I have applauded the work of some of them on the liberal side of things. For those of you keeping a hypocrisy log on me.

And there it is. The hook. For here I am lusting for some of that money too. What we could do with it in Watauga County.

Posted by J.W. Williamson at 3/06/2020 10:50:00 AM
Email ThisBlogThis!Share to TwitterShare to FacebookShare to Pinterest
Labels: Mike Bloomberg

This article delves into the field staff for Bloomberg. Dysfunction junction. You can't pass out $6,000/per/month salaries and hope for passion or even basic belief in the candidate writing the checks. Will his Independent Expenditure PAC be any better? https://www.thenation.com/article/politics/bloomberg-campaign-warren/?fbclid=IwAR1Xr3hkanRnOpxLSYi3KmAUgQKkhOtiatbG8k5CPqk5a2qaHFSj4cy_JTI