The Elections of March: Democratic Primary in NCS39


This NC Senate district should be another easy pickup for Democrats next November, so profiling the Democrats who have filed for the March 3rd primary seems essential. Senate District 39 is Republican Dan Bishop's old homebase, before he made the jump to the US Congress in a special election this year, and it's been redistricted to rank as "Likely Democratic." Two Democrats are running. 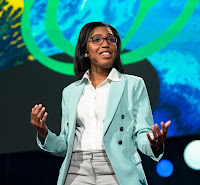 On paper Salvador looks like she could be the frontrunner. She's a 29-year-old millennial (born 1990) without political experience but with demonstrated commitment to community-building. She graduated from UNC-Charlotte (econ and anthro), studied energy and environmental design with the U.S. Green Building Council, and founded the Renewable Energy Transition Initiative (RETI) to help educate low-income households to cope with high energy costs. She did a TED talk about that effort in 2018 which was perhaps stronger on inspiration than on science, but the exposure might just propel her into the NC Senate.

She has a campaign web URL but so far no content, and her social media presence is de minimis (other than Facebook). We expect all of that to blossom soon (it better!). Her RETI website is much more developed, but from the content I can't assess just how successful she's been in helping poor people cope with high energy costs. The website boasts of at least one low-income household getting solar panels installed free, through a partnership arrangement, but other concrete accomplishments are not immediately obvious.

She's been recognized in Mecklenburg County as a rising star. In 2018, UNC-Charlotte listed her as an Alumna of the Year and SouthPark Magazine called her a "Woman To Watch." We're watching! 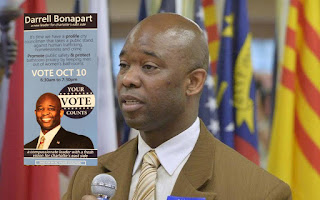 Bonapart is a Gen-X-er, born in 1969. He's been far more active with the Mecklenburg County Democratic Party than Salvador (given his age, perhaps), and he's tried unsuccessfully for public office several times in the past. He first ran for a Charlotte City Council at-large seat in 2015, was defeated in the primary and then ran again in 2017 and did better, making it to a primary run-off before he lost. The campaign flyer pictured to the right makes it clear that he ran as an anti-abortion rights Democrat who also apparently supported HB2 (or at least opposed Charlotte's bathroom ordinance that prompted HB2).

Bonapart had also put himself forward in 2014 as a possible replacement for Sen. Dan Clodfelter, who quit the senate to become mayor of Charlotte, but current incumbent Jeff Jackson won the appointment.

He has even less campaign infrastructure so far than Salvador -- no website that I can find and only a Facebook page.


The Republican on the Fall Ballot -- Josh Niday

Whoever wins the Democratic primary will face Republican millennial Josh Niday. He's 26, born in 1993. Niday previously ran for the NC House in 2018 in District 99, getting just over 17% of the vote against Democrat Nasif Majeed. He graduated from UNC-Charlotte in 2016 with a degree in poly sci. He has a Facebook page but little else that I can find.