George Holding in the NC2 Opts for Retirement Because of Redistricting 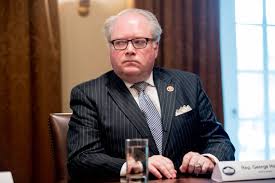 US Congressman George Holding's District 2 became Wake County and Wake County alone (greater Raleigh) in the most recent round of court-ordered redistricting. Whereas Holding was initially elected and reelected via very Republican-heavy mapping, he's suddenly been thrown into one of the most blue-trending counties in the state, with strong Democratic contenders for that congressional seat already either announcing or already well underway. Who said, "Discretion is the better part of valor"? Was it a fat man in armor? George Holding announced a couple of days ago that he wouldn't run in another adjacent district if it already had a Republican rep. So today he opted out entirely, said he's retiring from Congress.

There's already a potentially invigorating Democratic scrimmage for the seat. On Tuesday, Deborah Ross, the former Democratic candidate for the US Senate (she ran against Dick Burr in 2016 and got over 45% of the vote statewide), announced that she would seek the seat. She'll be formidable. But retired Marine "top gun" aviator Scott Cooper also looks strong, and he's been building a campaign against Holding since last year.

Shame to watch Cooper and Ross duke it out, so it's relieving to hear this morning that Cooper might be reconsidering, might jump over to the new 8th District, which runs south of Wake through Harnett, Cumberland, and Lee counties, then due west through Moore, Montgomery, Stanly, and Cabarrus. On the face of it, the new 8th looks considerably less friendly to Democrats, though an ex-Marine fighter pilot like Scott Cooper might be the man to change that. (For the record, the rumor of Cooper's maybe switching his campaign to the 8th might be nothing more than rumor. Cooper's Twitter feed certainly doesn't indicate anything other than "full throttle up" for the 2nd.)

In the environment we're currently occupying, every weather-front creates more weather. Democrat Scott Huffman has been running an energetic campaign already for months in the 8th against incumbent Republican Richard Hudson, and the forecast that Scott Cooper might move his campaign south could seem like a bad cold front blowing in (and I've exhausted the weather metaphor).

Lots of ferment since the court approved the new NC congressional districts for 2020. Sometimes it's just going to come down to the better candidate prevailing.