Abandoning the Life Raft for a Sinking Ship 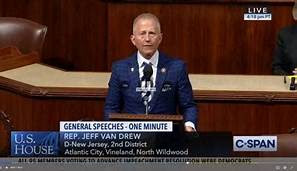 I'm trying to understand the thinking of Congressman Jeff Van Drew of the New Jersey 2nd District. News leaked over the weekend that he had gone to the White House and had told the Twitterman that he would leave the Democratic Party and become a Republican. Because he disagrees with impeachment.

He's also reportedly got very low polling numbers, with some 58% of his constituents already wanting a different congressperson. A poll of likely Democratic primary voters was even worse after he announced that he would not be voting for impeachment (even though he promised at the time to remain a Democrat).

The bad polling may be the only explanation that makes any sense, especially since Trump likely told him he'd personally campaign for him if he became a Republican. Van Drew is willing to join the corrupt party of Trump in a bizarre attempt to save his own skin.

His staff did not react well to the news. They're not willing to follow him onto that political Titanic. Six top staffers have resigned: Van Drew's legislative director and deputy chief, two other deputy chiefs of staff, his communications director, a legislative staff assistant, and his director of constituency relations have all signed a resignation letter: “Sadly, Congressman Van Drew’s decision to join the ranks of the Republican Party led by Donald Trump does not align with the values we brought to this job when we joined his office.”

Van Drew is a dentist. He previously served in both the New Jersey General Assembly and the state's senate before running for the open NJ-2 seat in 2018, taking almost 53% of the vote. Technically, he's been in the U.S. Congress for less than a year -- he only took office on January 3 of this year. That's fast for pulling a party switcheroo, but ... bless his heart!

There's already a Democrat, Brigid Harrison, who announced that she was considering a primary run against Van Drew. His switch of parties will open a wide path for her to seize the nomination.

Posted by J.W. Williamson at 12/16/2019 09:55:00 AM
Email ThisBlogThis!Share to TwitterShare to FacebookShare to Pinterest
Labels: Donald Trump, Jeff Van Drew

I'm doubtful that the NJ GOP would support him in the primaries. He'll likely wind up being another example of a career ended by the touch of Trump.