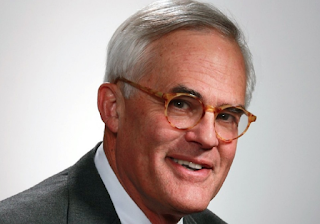 Republican conservative Garland Tucker announced back in May that he would be entering the Republican primary in 2020 to challenge Sen. Thom Tillis. Senior fellow at the John Locke Foundation and author of "Conservative Heroes: Jefferson to Reagan," Tucker convincingly played the old-fashioned, rock-ribbed, Christian gentleman when he blasted Trump during the 2016 primaries, out loud and in print in the Raleigh News and Observer: “Trump is a twice-divorced, self-acknowledged adulterer who has, in the course of this campaign, uttered some of the most unkind, disgusting comments ever made by any American politician,” Tucker wrote.

As pious as you could want. Also remarkably truthful. He even looks like every Southern Baptist deacon.

Tucker co-founded a business development and investment company, Triangle Capital, which "took on hundreds of millions in taxpayer-backed Small Business Administration (SBA) loans during the Obama administration, investing the money in private companies. In 2011, Triangle Capital invested $12 million in Dick's Last Resort (DLR), a chain of restaurants known for using vulgar and demeaning language toward guests, including children" (investigative reporting by Collin Anderson). 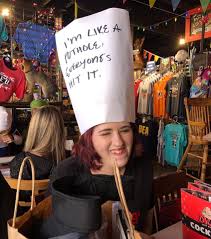 Setting aside Triangle Capital's complicity in taking taxpayer money as a private interest, Dick's Last Resort, as a high-dollar investment for one Garland Tucker, is even more inexplicable. Because Dick's Last Resort is exactly what it sounds (and looks) like ... one long (hee!) penis joke. "Dick's Last Resort is a bar and restaurant chain in The United States, known for its intentional employment of an obnoxious staff." Wikipedia continues: "Dick's Last Resort teaches its servers to be obnoxious. In addition to the staff, the decor is considered to be 'wacky.' The restaurant uses picnic-style tables and no tablecloths. Patrons of Dick's are expected to be insulted, or placed in uncomfortable situations. Adult bibs and large, hand-made, paper hats are given to diners to wear during their stay. There are no napkins on the tables: they are generally thrown at the customers by the serving staff." Photos are abundant. One young woman: "I'm like a pothole. Everyone's hit it." On a child: "I eat Skittles and fart rainbows."

Collin Anderson again: "Other accounts of Dick's detail 'jokes' including telling a 13-year-old girl to 'go back to the ghetto to get her hair done again,' calling a 16-year-old a 'fat fuck,' and writing 'I spread my legs more than barbie' on a four-year-old girl's hat. The restaurant's vulgarity is also reflected in its merchandise, which includes 'I Heart Dick' underwear, 'Chicks Love Dick's' t-shirts, and 'Beverage Babe' koozies."

It's the merchandise, baby! That's where the money is.

DLR is Hooters without clean tables and with much less cosseting. And -- actually ... let's be honest here -- harmless entertainment for those who want such entertainment. People go 'cause they want the thrill of un-PC public transgression. They like the deliberate gunge. And why not?

I'm looking right now for the closest Dick's Last Resort. 'Pears to be in Gatlinburg, with another'n close by in Pigeon Forge. (Those Tennesseans! They always get the good stuff first.) Also one in Myrtle Beach. There are only 13 in the whole nation (at last count), starting in Dallas, but with three clustered in East Coast working-class resort areas, I detect deliberate marketing to a receptive demographic. And good for them! (Omitted here: Any attempt to link the one-upping of "respectable"  or elite dining establishments to the election of Donald J. Trump.)

But how does the pious Garland Tucker justify the investment? The Tucker campaign is staying mum. No one responded to a request for comment from Collin Anderson. It's a minor embarrassment for Tucker, no big scandal. Being identified as a hypocrite, though never very pleasant, has become a standard feature of life for conservative Republicans in the Age of Trump. Because Dick's Last Resort obviously makes money, and looks good for future expansion -- that's why Garland Tucker put $12 million into it. Duh. "DLR has a consistent history of strong operating performance and has demonstrated its ability to move successfully into new markets throughout the country," commented Tucker in a press release from Triangle Capital. The vulgarity? Doesn't exist if you don't see it. I'd be willing to bet that Garland Tucker has never -- not in a million zillion years -- never sat at one of those picnic tables nor wore a silly hat. His official position: "DLR offers a unique dining experience with an interactive wait staff that entertains customers throughout the meal with tasteful humor."

A good Christian conservative gentleman can wink at anything -- we already knew that, didn't we? --and so we float ourselves on rafts of lies for the pursuit of money.

Posted by J.W. Williamson at 12/01/2019 11:19:00 AM
Email ThisBlogThis!Share to TwitterShare to FacebookShare to Pinterest
Labels: Garland Tucker III, religion and politics, Thom Tillis