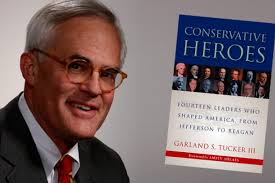 The Raleigh News and Observer (specifically, Brian Murphy) broke the news yesterday that Raleigh businessman Garland Tucker III, senior fellow at the John Locke Foundation, and author of "Conservative Heroes: Jefferson to Reagan," filed paperwork to run in the March 2020 Republican primary against incumbent Senator Thom Tillis. Of note: Carter Wrenn, conservative strategist who was at Jesse Helms's elbow for decades, has signed on to advise the Tucker campaign.

Here's where it gets immediately intriguing: Tillis instantly attacked Tucker as an "anti-Trump activist." Bold words there, Senator, from the man who opposed Trump for his position on immigration, protecting the special counsel, and Trump’s national emergency declaration. (Murphy does point out that Tillis has voted with Trump 94.7 percent of the time. But still.)

Tucker does look pretty anti-Trump, and the Tillis people are fanning that coal:


Tillis’s team pointed to a 2016 News & Observer column in which Tucker said he was begrudgingly voting for Trump, whose nomination he had “stoutly resisted” during the primary.

“Trump is a twice-divorced, self-acknowledged adulterer who has, in the course of this campaign, uttered some of the most unkind, disgusting comments ever made by any American politician,” Tucker wrote in the piece. “Sadly, Clinton offers no personal moral superiority.”

In May 2015, Tucker hosted a 250-person luncheon in his backyard for then-Wisconsin Gov. Scott Walker’s campaign for the Republican presidential nod.

Tucker's hiring of Carter Wrenn is another signal of anti-Trumpism, as Wrenn has made no secret on his blog of his disdain for Twitterman. And Wrenn efficiently drilled his stubby finger into Tillis's weak spot: "...Tillis is a Washington politician, who talks a good game, but when you look at how he votes, it doesn’t match up,” Wrenn told a reporter from The Hill. “He has his finger to the air and he flip flops” on the issues.

At the moment no big name Democrat has announced a campaign for the Tillis seat. We hope that changes. And soon.