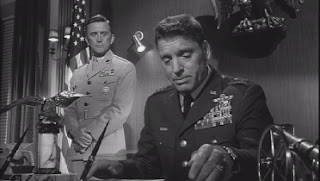 We must applaud those scamps over at AMC who're currently running "Seven Days in May," the 1964 political thriller that John Frankenheimer made about an attempted military takeover of the government of the United States. Great cast, great noir lighting, an edge-of-the-seat narrative, and a very interesting choice for AMC right now. A programmer over there might be making a comment on current events.

Back in "Seven Days in May" time, the treasonous General James Scott, head of the Joint Chiefs, sets up a military coup because a very unpopular nuclear arms treaty with Russia has been negotiated and signed by a very unpopular and weak president. The coup doesn't succeed.

Was the programmer at AMC thinking of the military generals who head several crucial arms of the Trump government? Those are arms of government, incidentally, with plenty of arms (if you catch my meaning). A Marine general just became Trump's chief of staff. Presumably, he'll be presiding over the central brain of the entire Trump administration.

A military coup today? What would be the trigger? Trump is soft on Russia like the president in "Seven Days in May," but that wouldn't do it. One too many irrational, dangerous decisions with direct impact on military personnel might, like, say, suddenly banning several thousand uniform service people because they happen to be transgender. Or ordering military operations that cause death because of stupidity.

Maybe all it would take would be a constitutional crisis wherein a general understood the fulsome danger to the Republic from an impulsive, authoritarian ignoramus?

You think there will be a military coup because of Trump throwing perverts out of the military???????

You have lost your mind.

Well at least I'm not alone.

No, you're most certainly not alone: "Defense Chiefs Resist Donald Trump's Ban on Transgender Troops" (https://www.theguardian.com/us-news/2017/jul/27/donald-trump-transgender-ban-troops-pentagon-us-military)

Why is it that most of the people in favor of a transgender military have never served and have no idea what military life is?
Our job is to kill enemy and blow stuff up. We are not here for your left wing social experimentation!