We Are Already in a Constitutional Crisis 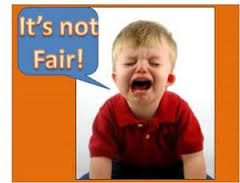 Everybody's buzzing this morning about the taped interview Trump gave to NYTimes reporters.

The main takeaway: Trump thought he'd be king once he got into the White House, thought that Attorney General Jeff Sessions was his personal lawyer and would protect him from any FBI investigation, thinks now that he is still above the rule of law. That's a constitutional crisis in the making.

Trump said: “Jeff Sessions takes the job, gets into the job, recuses himself, which frankly I think is very unfair to the president. How do you take a job and then recuse yourself? If he would have recused himself before the job, I would have said, ‘Thanks, Jeff, but I’m not going to take you.’ It’s extremely unfair — and that’s a mild word — to the president.”

"Unfair to the president" because obviously Jeff Sessions was supposed to shield Trump from the FBI, and he could have shielded Trump from the FBI, but he went and recused himself and exposed Trump to the FBI. What a louse! (Makes us wonder all over again what Trump must have said to the new guy he nominated to head the FBI, or what he wanted to say to him.)

Is there any other possible interpretation for what Trump meant when he said "it's unfair"?