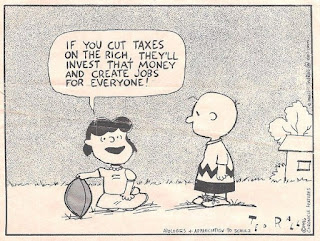 South Carolina, Tennessee, and Kansas -- especially Kansas! -- are wholly dominated by conservative Republican state legislatures. Yet Republican state legislatures in all three states -- South Carolina, Tennessee, and especially Kansas -- have recently decided to raise taxes because of revenue shortfalls, and they have done so often over the vetoes of their conservative Republican governors:


...in the most striking rebuke of conservative tax policy in recent memory, Republicans in Kansas have undone much of the tax overhaul that Gov. Sam Brownback held up as a model for other states and the federal government to emulate .... Republican lawmakers in Kansas decided that they could cut only so much without doing irreparable harm to vital services and voted to increase taxes by $1.2 billion last month. Mr. Brownback vetoed the plan, but Republicans overrode him. [Jeremy Peters]

Stephanie Clayton, a Republican state representative in Kansas, said that many conservatives overpromised on tax cuts as a “sort-of Ayn Rand utopia, a red-state model,” citing the author whose works have influenced the American libertarian movement.

“And I loved Ayn Rand when I was 18 — before I had children and figured out how the world really works,” Ms. Clayton added. “That’s not how it works, as it turns out.”

But tell that to Congresswoman Virginia Foxx and the rest of her crowd up in Washington, who are eager to do the "Kansas experiment" for the whole country. Congressional Republicans have a current president who doesn't know a Rand from a rind and will go along with anything they propose.

“Tax cuts — good. And that’s about as much thinking that goes into it,” said Chris Buskirk, a radio host and publisher of American Greatness, a conservative online journal. Now, he said, Republicans in Washington seem to be in an arms race to the lowest rates possible.

“Everybody is trying to overbid each other,” Mr. Buskirk said. “How much more can we cut?”

Until the elections of 2018, at least, they have all the power, and they will not use their power for the public good when there are so many needy millionaires with their hands out.