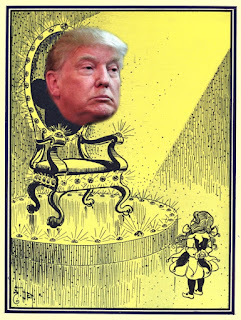 A federal judge in Virginia has ruled that the First Amendment’s free speech clause prohibits officeholders from blocking social media users -- particularly in this case, Facebook users -- on the basis of their views.

Davison v. Loudoun County Board of Supervisors involved the chair of the Loudoun County Board of Supervisors. According to Mark Joseph Stern, the chair of the board runs a Facebook page to keep in touch with her constituents. In one post to the page, she wrote, “I really want to hear from ANY Loudoun citizen on ANY issues, request, criticism, compliment, or just your thoughts.” She explicitly encouraged Loudoun residents to reach out to her through her “county Facebook page.”

When a county resident did reach out and alleged that the county school board was corrupt, the board chair deleted the post and blocked the person from further comments.

The federal judge ruled she couldn't do that. "Viewpoint discrimination" is prohibited by public officials under the First Amendment, the judge said.

According to Stern, the Knight First Amendment Institute at Columbia University has sued Trump on behalf of Twitter users the president has blocked because they replied to his tweets with comments that criticized, mocked, or disagreed with him. Trump's blocking of those people amounted to an unconstitutional effort to suppress dissent, according to the lawsuit.

Whether the Loudoun County case is analogous and sets a judicial precedent remains to be seen.

But Trump's wholesale blocking of his critics from responding negatively to his Twitter rants does seem like more imperial presidency at work, especially in light of Davison v. Loudoun County Board of Supervisors.

Mark Walker's Facebook Admin has blocked a number of constituents who disagreed with Rep Walker on Facebook.
https://www.facebook.com/pg/RepMarkWalker/
I'm blocked and I know I did not use any profanity or say anything that was not true.

I posted this on my Facebook page and Facebook took it down, calling it spam. Isn't that special.