Baden-Powell Is Rolling Over in His Grave 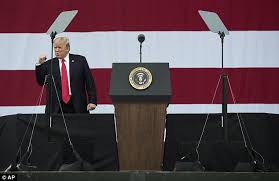 Boy Scout Oath: "On my honor, I will do my best. To do my duty to God and my country and to obey the Scout Law; To help other people at all times; To keep myself physically strong, mentally awake and morally straight."

Last night at the Boy Scout Jamboree and for over 35 minutes, "the president threatened to fire one of his Cabinet members, attacked former president Barack Obama, dissed his former rival Hillary Clinton, marveled at the size of the crowd, warned the boys about the 'fake media,' mocked pollsters and pundits, and said more people would say 'Merry Christmas' under his presidency. He also told a rambling tale about a famous, now-deceased home builder that meandered from a Manhattan cocktail party to a yacht and then to places that the president would only allow the boys’ imaginations to go." (John Wagner and Jenna Johnson)

Posted by J.W. Williamson at 7/25/2017 09:32:00 AM
Email ThisBlogThis!Share to TwitterShare to FacebookShare to Pinterest
Labels: Boy Scouts of America, Donald Trump

He makes my skin crawl. This smirking performance before those young men should embarrass every parent of a young man.

"The 29 most cringe-worthy lines" from Trump's speech (?) to the Boy Scouts: http://www.cnn.com/2017/07/25/politics/donald-trump-boy-scouts-speech/index.html?CNNPolitics=Tw