Our President Is a Thug 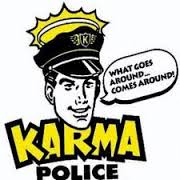 Trump is catching flak from conservatives because of his attacks on conservative darling Jeff Sessions. So what's a bully to do?

You veer right and slug the weakest kid on the playground and invite all the other bullies to pile on.


[Sec of Defense General Jim] Mattis, who was on vacation, was silent on the new policy. People close to the defense secretary said he was appalled that Mr. Trump chose to unveil his decision in tweets, in part because of the message they sent to transgender active-duty service members, including those deployed overseas, that they were suddenly no longer welcome....

Some 2,000 to 11,000 active-duty troops are transgender, according to a 2016 RAND Corporation study commissioned by the Pentagon, though estimates of the number of transgender service members have varied widely, and are sometimes as high as 15,000.

Who does that thing?

A man (?) who never served a day in the military. A man who needed a convenient scapegoat he could sic his militantly anti-LGBT followers on. A man who needed a giant distraction. A man with no soul, no humanity, no decency, no idea of the pain and fear he was inflicting on fellow citizens.

He deserves to go to hell, either in this life or beyond. I trust that it will be in this life, so we can all watch.

Posted by J.W. Williamson at 7/27/2017 11:17:00 AM
Email ThisBlogThis!Share to TwitterShare to FacebookShare to Pinterest
Labels: Donald Trump, homophobia