Trump: "I Learned My Politics From Vlad the Impaler" 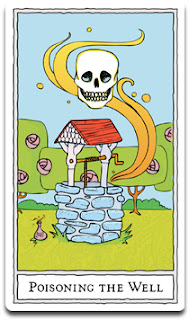 Translation: We will make people suffer to prove a political point. People are mere pawns, and sick people are even easier to torture.

According to Thomas Kaplan, Trump has several options for making Obamacare fail faster:

1. "He could throw insurance markets into a tailspin at any time by cutting off the subsidy payments to insurers, as he has threatened to do."

2. "He could further destabilize the markets by not enforcing the mandate that most Americans have health insurance."

3. "He could cancel advertising and other efforts to encourage enrollment under the Affordable Care Act when the annual sign-up period begins in November."

4. And then there's the poor-mouthing that Trump and all Republican politicians have been doing for months and months: "A barrage of negative statements from the administration could project an official view that the health law is collapsing, creating a self-fulfilling prophecy."

Sabotaging people's health insurance out of revenge seems just so perfect for the "Republican brand." And Trump's doubly an idiot if he thinks he won't own that.