I can't see any of these scowling Trump photos without remembering the intel that surfaced last March, that Trump aspires to emulate Winston Churchill, thinks that staring down the camera in that sour fashion makes him look strong and determined rather than deluded and insecure:

"As a presidential candidate, he wanted to look dour, and vetoed any campaign imagery that so much as hinted at weakness, aides said. Which is why every self-selected snapshot — down to the squinty-eyed scowl attached to his Twitter account — features a tough-guy sourpuss. 'Like Churchill,' is what Mr. Trump would tell staffers when asked what look he was going for."

Which is why, evidently, Trump had a bust of Churchill installed in the Oval Office, presumably so he could study the pose and copy it. He must practice the look. Holding that scowl sometimes makes him look like he's suppressing a wet fart. 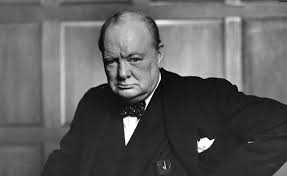 He can copy the look but he can't compete with the man. Churchill was a wartime hero, a lifelong politician, an accomplished writer and master of the English language, a painter, a loyal husband, and a celebrated orator whose most famous speech -- the "Iron Curtain" speech -- was a passionate denouncement of the policies and politics of Russia at the start of the Cold War.

To understand Trump, go no further than Tim O’Brien, author of “TrumpNation,” a 2005 biography: “He’s deeply, deeply insecure about how he’s perceived in the world, about whether or not he’s competent and deserves what he’s gotten,” O'Brien said. “There’s an unquenchable thirst for validation and love. That’s why he can never stay quiet, even when it would be wise strategically or emotionally to hold back.”

Posted by J.W. Williamson at 7/16/2017 09:09:00 AM
Email ThisBlogThis!Share to TwitterShare to FacebookShare to Pinterest
Labels: Donald Trump

Gosh, I hope not. Churchill was certainly not the man the court historians say he was.