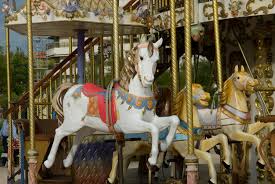 The painted Republican ponies on the State Board of Elections continue to go round-'n'-round, but certain key voter rights in North Carolina remain in effect -- so far, at least -- for this fall's municipal elections.

1. Not surprising at all, the three Republicans on the State Board of Elections voted yesterday to defy Wake County Superior Court Judge Donald Stephens' ruling last year ... as they voted 3-2 to accept the Aceto-Eggers Early Voting plan for this fall's elections ... thus denying once again a polling site on the Appalachian State University campus and (in order to seem consistent?) also denying an Early Voting site for Blowing Rock, which had requested one.

2. Until Federal District Court Judge Schroeder rules in the voting rights challenge to NC's new voting law (the case argued in Winston-Salem this past summer) -- and this may come as a surprise -- Same Day Registration during Early Voting and out-of-precinct voting on Election Day are BOTH STILL in effect for the 2015 municipal elections.

To use Same Day Registration (only available during Early Voting), a voter must provide one of the following identifying documents to an election official at any Early Voting location (which in Watauga's case, will be only at the county courthouse):

Out-of-precinct voting means that on Election Day a voter can cast a ballot that will be counted (at least in part) at any voting precinct in his or her county.

Again, a court ruling could change this situation, but for now Same Day Registration and out-of-precinct voting are the law of the land.

Posted by J.W. Williamson at 9/19/2015 10:22:00 AM
Email ThisBlogThis!Share to TwitterShare to FacebookShare to Pinterest
Labels: early voting in Watauga County, North Carolina Board of Elections, voting rights