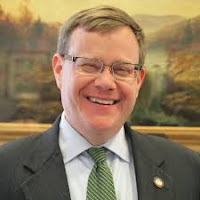 So Tim Moore of Kings Mountain in Cleveland County got to be Speaker of the North Carolina House, and a provision showed up in the House budget bill establishing a rural water and sewer infrastructure grant that must go to "a town of less than 12,000 people that received a state loan in 2013 to replace water distribution lines.”

The only North Carolina town that fits that description is Tim Moore's hometown of Kings Mountain, according to the Raleigh News & Observer. Kings Mountain is where Moore practices law, where he was recently hired as Cleveland County attorney with a regular yearly retainer of $25,000 (in addition to the $250-per-hour he'll be able to charge for actual legal work).

The News & Observer has identified at least $6 million that Moore has managed to earmark for Cleveland County, including a $200,000 grant for the American Legion World Series baseball tournament.

Suck on that, school teachers!

Posted by J.W. Williamson at 9/05/2015 08:38:00 AM
Email ThisBlogThis!Share to TwitterShare to FacebookShare to Pinterest
Labels: North Carolina budget, Tim Moore