Making NC Higher Education a Safe Haven for the Rich 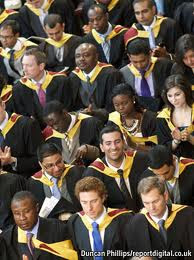 Long article in today's Charlotte Observer RE the attack on higher education funding in North Carolina. The new Republican majority in the General Assembly seem more determined than ever to shift the burden of college-funding onto the backs of students. With this trend continuing with promised budget cuts this year (ranging in predictions from 15 - 30 percent), pretty soon only the children of bank executives will be able to afford college.

"We shouldn't go down a road like that without significant debate," said UNC system President Tom Ross, "because it has huge implications for the future of the state and the health of its economy."

Some hard numbers (from the Observer article):

◘ In 1990, the state provided 81 percent of the money used to teach undergraduate students in the UNC system, according to system data. By last year, that share had fallen to 63.8 percent.

◘ A year ago, the cost of public higher education went up twice, first in the UNC system's regular process, and then again in late summer after the legislature signed off on it as a stopgap measure to help plug a massive budget hole.

◘ The dual increases drove rates as much as 18 percent higher on some campuses.

The article points out that so far students have mainly "acquiesced" in this shifting of the burden on paying for college. Maybe that's coming to an end? A protest walk-out last Thursday on the ASU campus might be indicative of students beginning to wake up a bit to what's going on with their futures.

It happens that the sole student member of the UNC system's Board of Governors is an ASU graduate student, Atul Bhula. He is quoted in the Charlotte Observer article: "I'm afraid of this General Assembly moving tuition from a secondary source to a primary source of revenue. I think the General Assembly needs to be reminded of its constitutional mandate."

The current bunch in control of the General Assembly seem to be unfamiliar with that concept.
Posted by J.W. Williamson at 4/03/2011 11:35:00 AM
Email ThisBlogThis!Share to TwitterShare to FacebookShare to Pinterest
Labels: Appalachian State University, higher education, Republican "brand"

"The current bunch in control of the General Assembly seem to be unfamiliar with that concept."

The current bunch in control of the General Assembly seem to be unfamiliar with human beings.

Have administration cost at the university level gone up 400% over the last five years?

It's just plain pathetic that people write here and elsewhere while hiding behind some pseudonym. Whatever opinion they might proffer loses most value because of that. What are they afraid of? I guess it allows any old stuff to be thrown against the wall, such as the comment here about administrative costs, and without any "cost" to them. Pusillanimity, that's all it is.

And JW, whom do you qualify as being rich?

Or what is your definition of rich?

So NC State tuition went up by 270% over 10 years? Well there's the problem. They have no incentive to control costs if they can freely tap the tax coffers to fund any and all increases. The state should indeed put pressure on them to control costs. If they drive off students by their reckless spending, they'll go out of business. That's not the fault of government, that's a failure of management in the school system.

For some 200 years in this country (longer in some other countries) we have valued free (or low cost) public-supported education to our people. It has been considered an intrinsic social good because it tends to produce informed citizens, reliable contributors to our economy, and creates conditions for individual initiative, innovation, and achievement. For the last 35 years or so, this value has been under attack. Many forces in our country now want education to be seen as one more material good competing for our discretionary dollars in the market. The dangers to this model are huge. If you don't believe something larger is at stake besides nitpicking over budgets, read this well-documented article:

It isn't about HigherEd, but BrotherDoc's article is worth reading for two reasons: 1) the way it points out how both regular public and charter public schools have problems, and 2) the way it points out how school problems emerge from problems at home (e.g. poverty) not teacher/school problems. Thus, charter schools are not a solution for what ails America's public schools.

I could quibble with details, but I basically agree. Charter schools, especially those run by massive organizations, are not a large-scale solution to our education problems. As charter schools spread they'll run into the same problem as regular schools--low levels of parental attention (perhaps caused by poverty)--and fail in similar ways. The article is also right, though, when it says that education funding is no panacea either--low parental involvement (poverty again raises its ugly head) will render it moot just as it renders charter innovation moot.

Ultimately, fights about charters or funding miss the point. Poverty activists like the author and homeschoolers like me have different ideas about what we should do to change low parental involvement, but we both point to the same deeper issues.

Michael Moore said "What are they afraid of?"

I personally have heard my department chair encourage a senior faculty member to blackball job applications from suspected conservatives.

So Mike, how does losing my job because I deviate from the Liberal Orthodoxy sound?

Anonymous,
What does your dean and (acting)provost think about what you heard?

How can an encouragement to vet applications threaten your job?

Have you talked about this to your local AAUP chapter? How about the chair of the Faculty Senate?

Some of these latter folks might be --hated word?--Liberals, but they do not countenance threats for one's political POV or vetting job applications for the same.

How can an encouragement to vet applications threaten your job?

Years of observing their behavior leads me to believe they'd be only too happy to act the same way with tenure decisions.

What does your dean and (acting)provost think about what you heard? Have you talked about this to your local AAUP chapter? How about the chair of the Faculty Senate?

No, because I'm not some whiny-ass liberal. I'll do my job and stay anonymous until I have tenure.

Anonymous,
I hope you do your job very well; but what if you don't get tenure? Will you then become a whiny-ass? If you would at all be disappointed with such a decision, you need to keep a record of issues that could be construed to have affected that result.

You seem to be extremely passive-aggressive. Is that a help to your professional life? Or, are you just trying to hang on, while disliking your life and your colleagues?

Well, this post was supposed to be about higher education, but since at least two people who've written here mentioned public education in general, I'll pick up on one issue that was brought up. That is the importance of parent involvement in public education. As someone who worked with a fairly large urban school district for several years, I have been very surprised at how little the very important role of parents has been mentioned around here or even in NC in general. It absolutely can't be overlooked.

Dear Last "Anonymous" Poster: The point of not posting as Anonymous is so that readers can distinguish one A... from another. It is perfectly possible to register a pseudonym, many posters here do that, including me. Maybe your handle could be Paranoiac.
Charter-lover, the question IS larger that university funding, or charters vs. publics vs. homeschool. America is a big country and has room for many models of education--witness our lively and diverse number of private colleges and universities which range from Harvard and Yale to Podunk Bible College. I have no problem with variety and diversity per se but I do object to efforts to continually deprive funds for our public schools, whether at state or local level, or denigrate or eliminate federal support for educational programs which are designed to help overcome the very problems you mention (poverty for example), which keep everyone from a shot at an education. Public funding from a common tax base for free (or low cost) school, K-12 AND university, is the model that has worked (reasonably, not perfectly) well for America for generations. Those who attack it tend to have ideological agendas which can be anything from free market fanaticism to religious bigotry to fear of "the other." It's time for defenders of public education to rally.

The point of not allowing posting as Anonymous is so that the leftists on this blog can attack personalities instead of having to defend or oppose statements, which is harder to do.