The Republican Vision for NC: Dead Last in Public Education 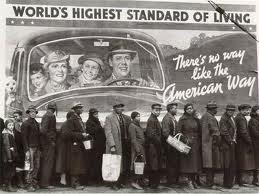 The proposed budget put out by the new Republican majority in the NC House will reduce spending on public education. North Carolina already ranks 46th out of 50 states in per-pupil spending. The new proposed budget in the House would put us dead last -- 50th of 50.

Their own Republican U.S. Senator Dick Burr sent the House leadership a quiet warning last week to lay off the mischief of defunding education: "When we talk about the things that work," Burr said, "let's not overlook what most employers in the 21st century are looking for -- that's an educated workforce."

Laura Leslie of WRAL in Raleigh reports that it's mighty difficult to discern just how many jobs are at stake because of budget legerdemain -- job cuts are hidden. But the Department of Public Instruction has calculated that the House budget will cut over 18,532 jobs in its K-12 spending plan. And this is what the NCAE projects in job losses:

These are just the jobs we stand to lose in K-12 schools. The House budget also proposes cutting the university system by a whopping 15.5 percent, which will mean thousands more jobs lost.

That's apparently what the Republicans meant when they said they would focus on "jobs, jobs, jobs" ... that is, eliminating them.

The Raleigh Bunch is taking us into a new Depression.

AND, OH, BY THE WAY
While they're proposing to dis-employ thousands of good and honest laborers in the vineyards of the Lord, they're simultanously proposing to cut corporate taxes even further. Rob Schofield:

The central, overriding, inexcusable sin of the new Republican leaders thus far in 2011 has been their pig-headed commitment to cutting taxes at a moment in which state revenues are severely depressed. Under the Republican plan, state taxes in FY 2012 will be more than a $1.6 billion lower than they were in FY 2011. Not only will they permit so-called “temporary” taxes to expire, Republicans will cut taxes on corporate profits even further.

I don't think that if we were just eliminating "waste" there would be so many job losses. Dramatically increasing class size and eliminating teacher assistants is either true stupidity or it's an attempt to cripple public education - I'm really not sure which.

GOPers: reverse Robin Hoods, rob from the poor, give to the rich. And they call this creating jobs? Trickle Down is dead, people. It don't get any drier than almost 0% borrowing rates. Corporations do not need any more tax breaks. In fact they should be paying more taxes to fund the schools, roads, police, fire, water, infrastructure, etc., that support them.

you guys are in thte minority said...

This is part of the strategy for a permanent Republican majority. First, you gut the schools, producing a generation of even dumber people than now. Then, the scare the hell out of the dumber people with your Republican fear tactics, and you deliver speech after speech teaching the general public to hate some other segment of society, i.e. African Americans, Mexicans, liberals, women, etc., etc., etc. Then this new generation of uninformed and stupid Americans registers collectively as Republicans. Voila'

Or maybe it's just step one in a complete corporate takeover of education. Once you destroy public education, you can build a new privatized system. It isn't enough to have Coke machines in the schools as obestity and diabetes rise; really, we should have the Heritage Foundation designing the curriculum. Teach first graders about oppressive government, the evil of zoning, the moral imperative to get rich, God's support for pollution, etc. Yeah, then we can be as great a nation as the Chinese.

A sampling of 1000 people out of the entire US really says a lot. I guess it must be true haha...

You guys - were you trying to link the article stating that a majority doesn't feel that we're getting a good return on the investment in education? The poll was conducted nationwide - NC is already near the bottom of the barrel in terms of per student expenditure. The results from that survey suggest that taxpayers do NOT think the government is spending too much. "Are taxpayers getting a good return on their investment?" is a bit of a leading question, wouldn't you say? How is the average taxpayer going to determine "a good return?" Public education is expensive, but do we really want to think about the long term effects of such drastic cuts in funding? I find it disturbing that no one seems interested in suggesting ways to improve public education or increase efficiency. It's all about cutting spending. With all the "eliminate waste" comments going around, I still haven't heard one person suggest exactly where the waste is found. I'm a big proponent of reducing waste, too. (We are talking about the government, so "eliminating" is obviously too strong of a word.) I think that WCSS did a good job in their latest budget of reducing and eliminating spending on "extras." But I'm not sure why they should be forced to eliminate positions in critical areas. It's just so shortsighted.

Ah, a perfect example of why the critical thinking skills gained with a good education are so important!

That's why I just can't lend much credence to a poll showing Americans don't feel their "getting their money's worth" from public schooling. I'll bet you anything that if the same issues had been framed in a different way, the response would have been different.

Beyond that, the majority isn't always right, period.

Then do a poll using Rasmusein's methods, frame the qestions as you like, and see.

I am not clear on this. The Democrats have been in control in NC for the past one hundred plus years. So, are they responsible for the lack of funding, a large percentage not graduating and an overall decline in most students not being prepared for college level work. It would be extreme difficult for Republicans to have created this in five months.

School performance is clearly linked to poverty. Schools in wealthy districts do a good job while schools in poor districts perform badly. school performance and poverty Another factor is the status and training of teachers. In countries such as Finland where teachers have a strong union and high status, schools and students show much better performance. Finland's education system

Maybe you should get your kids and move to Finland, Brushfire.

Oh the clever "If you like ____ so much, why don't you move there?" argument! Straight out of the 3rd grade debate manual.

Anon, there's nothing wrong with pointing out what another country is doing right. The "we're America, no one can do anything better than we can" attitude isn't going to get us anywhere. In fact, I think that's at least part of what's putting us behind at the moment. We need to look at what works and follow good ideas, even if they didn't originate here.

Again, if this is the most important thing in your life move there and take advantage of it. Those that don't agree with these policies can stay here and we'll all be happy.

You're still in the minority.

Some people are content with mediocrity. They are content to wallow in comfortable ignorance, until they notice the rest of the world moving ahead. Then they panic and blame everyone else for their failures. Since North Carolina has lost its manufacturing jobs, we could decide to focus on developing a world class education system that would attract high-tech industry and educated families from all over the world. Or we could hoard our pennies under the mattress and fade into feudal obscurity. I think we know what Anonymous would chose.