News From the Clown College 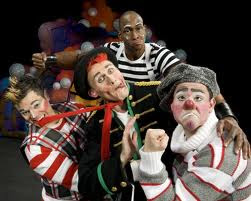 As always since January, it's difficult to keep up with the ludicrous jokes pouring out of the new Republican majority in Raleigh. Here are just a few of the most recent:

1. Harry Payne writes in the N&O about the craven attempt to let businesses off the hook for employees permanently injured on the job. He starts by observing how this New Bunch in Raleigh has jumped on the old Washington Republican habit of naming a new law in the most misleading way possible:

House bill 709, "Protect and Put NC Back to Work," is a shining example of the latest in that dark art where the bill title says one thing and the text of the bill does the opposite. A more accurate title would be "House Bill 709, An Act Pushed by Insurance Companies to Reduce Payments to Workers Permanently Disabled on the Job and to Tilt a Delicately Balanced Legal System Against the Interests of Every Injured Worker."

2. Rob Schofield calls our attention to a bill introduced in the NC Senate, the “School Violence Protection Act.” Among other things, the bill would require the expulsion of kids who have been twice alleged to be delinquent or undisciplined. Shadows of the 16th Century, when all it took for torture was someone's saying he saw you reading the Geneva rather than the Douay translation of the Bible. Plus the proposed new law specifies that “No school employee shall be reprimanded or dismissed for acting or failing to act to stop or intervene in an altercation between students.” May I hold your jacket, chum, while you beat the crap out of that gay kid?

3. Laura Leslie reported on perhaps our favorite head-scratcher of the week. Representative George Cleveland has decided that North Carolina can be -- and should be -- as ignorant as Oklahoma, so he's pushing our own anti-Sharia-law bill. Rep. Cleveland could offer no rational reason for why such a law is needed, other than the possibility that he heard something about it on right-wing talk radio.
Posted by J.W. Williamson at 4/22/2011 08:10:00 AM
Email ThisBlogThis!Share to TwitterShare to FacebookShare to Pinterest
Labels: Harry Payne, Laura Leslie, Republican "brand", Rob Schofield

Well, you SEE what Sharia Law caused to happen in Michigan? http://tpmmuckraker.talkingpointsmemo.com/2011/04/quran-burning_pastors_gun_accidentally_goes_off_in.php?ref=fpblg

So sad the state of affairs in our state and country's politics today, we are being led by a ship of fools.

A pastor carring a gun hasn't much faith in God, imho. Too bad about his shooting the floorboard in his car. He's just another idiot raising money from the insane and witless fearful.

Interestingly, his church in Florida had a massive exodus of members. The only ones left are related to him....

I heard that liberal Boone Town Council is thinking about imposing Sharia in Boone. But don't worry, I know that our astute and intelligent County Commission will protect us by outlawing it in Watauga County. Oh, I forgot. The Watauga County Commissioners don't consider the residents of Boone their constituents. Looks like Boone will have to fare for itself.

Are we to then acknowledge that some of you approve of Sharia Law and the subjugation of women?