April Is the Pharisee's Month 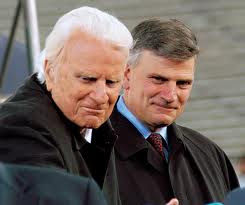 When asked by Christianity Today back in January if there was anything he regretted, Billy Graham said he should have studied more and preached less, and then this:

"I also would have steered clear of politics. I'm grateful for the opportunities God gave me to minister to people in high places; people in power have spiritual and personal needs like everyone else, and often they have no one to talk to. But looking back I know I sometimes crossed the line, and I wouldn't do that now."

Meanwhile, his son Franklin got the Graham ego but not the message. He said on Sunday, on This Week with Christiane Amanpour, that Donald Trump might be The One, the Great White Hope, and he dropped a couple of two-ton tablets of The Law on Obama's "Muslim-seed" head, ruling him out of the Kingdom where Franklin Graham is B.M.O.C., because hey! Franklin Graham knows how to assess everyone's level of Christianity down to the finest points.

Watauga County's most famous citizen at the moment. Has no regrets. For the moment.
Posted by J.W. Williamson at 4/26/2011 07:54:00 AM
Email ThisBlogThis!Share to TwitterShare to FacebookShare to Pinterest
Labels: Billy Graham, Franklin Graham, religion and politics

Wow - you took some serious liberties with what he said. First, he did not say anything that is not true. Amanpour has about as much objective credibility as Maddow - she simply had him on to make fun. In this case, she is the joke. As are you JW.

I read the interview, and other than Franklin having huge pieces of cause-and-effect in history backwards, I have to say - I don't recognize the "brand" of Christianity Franklin is talking about. Except for one part. I agree that only God can see one's heart. The rest of that sentence should be, "and the rest of us had best lay off judging."

I saw both his interview with Amanpour, where his self-declared integrity didn't quite shine through, but better, his interview with Lawrence O'Donnell, in which he again asserted that he doesn't know if Obama is a Christian since he can't see into his heart, but wouldn't say that it was impossible to make that judgment about others, i.e. he could recognize his political cronies (like The Donald, I guess) as good Christians like him, but not that feared Socialistic capitalist, Obama. I at least give Graham credit that he admitted that he's never voted for a Democrat for president, although he said that he has voted for some good Democrats in NC - I'm thinking Jimmy Hodges maybe, since he's a realtor and that would be consistent with his brand of Christianity, I think? Best, he refused to agree with Jesus' explicit repudiation of material wealth. That might interfere with his self-image, I guess.

I have always felt Billy G. is/was a great messenger when it comes to sharing the Gospel of Jesus Christ. He has graciously stayed out of the political arena, admiting the mistake when he openly supported Richard Nixon. From all I have read, I believe Billy would be dissappointed in the "road" his son has chosen. Obviously Franklin has not learned too much from his father. He will continue to divide Christians when he "draws the line" in politics, not to mention his claim that Islam is wicked and evil, then he wonders why the White House prefers him not to go over to Baghdad and pray. I deeply question his intentions and purpose.

Religion is some of the Devil's best work!

As a Christian I am deeply concerned at the message that Franklin Graham is sending the Nation. That he would support a "good Christian" like Donald Trump (had affairs, multiple marriages, excess that would make Jesus blush, etc...), but would not even entertain that Obama is a Christian (Stable marriage, no affairs, relatively low key as compared to how he could live). This is why people reject Christianity. Franklin is going to lose as many to the Christain faith as his dad brought to the faith before it's all over. Sad.