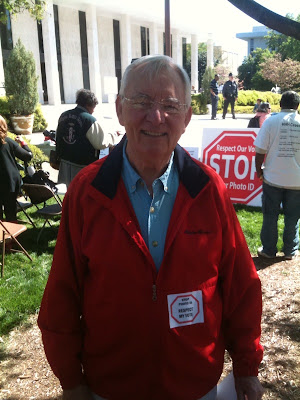 No, seriously. You never know who'll show up at a protest in Raleigh, but here was Jon Payne, the baby brother of the woman who raised Barack Obama in Hawaii, right there with the rest of us in Raleigh today for the rally to "STOP the Voter Photo ID" law.

He lives in North Carolina now. He thinks the proposed voter ID bill is a law proposed primarily to "get the jump" on voter turn-out in 2012, to disenfranchise as many black people as possible in a Southern state where black voters will be key next year, but a law that will also impact disproportionately elderly people and college-age voters, whose photo IDs at college will not have their college addresses on them.

Beautiful day in Raleigh, and what a nice man for any president's family!
Posted by J.W. Williamson at 4/13/2011 04:11:00 PM
Email ThisBlogThis!Share to TwitterShare to FacebookShare to Pinterest
Labels: Barack Obama, voter suppression, voting rights

I was there with Obama's Mama's Uncle to Stop the VoterID Bill. Thanks Obama's Uncle for showing up.