Mid-Terms at the Clown College 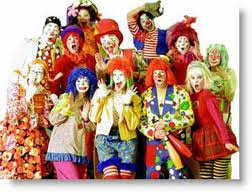 The new Republican majority in the General Assembly has passed Day 77 of their attempt to remake North Carolina to 1920 standards (or 1880). Trying to stay up with The Outrage of the Day has been exhausting, the official mainstream media press corps in Raleigh sprints to stay up, the rest of us regular citizens find our mouths permanently agape at the spectacle of over-reach, extremism, and iron-heartedness.

Bob Geary, in the Independent Weekly, does a more-than-adequate job of summing up the first 77 days:

Taken as a whole, the Republican agenda thus far is a mix of short-term program cuts, longer-term ideas for dismantling the public sector, sops to corporate backers and series of bills aimed at putting minority groups down.

Jobs? Not so much. Public education? The new Republican majority has shown its hostility in any number of ways. Geary's assessment is pointed:

...many Republican legislators are at odds with the whole idea of traditional public schools—of a free, K–12 system, that is, which enrolls most school-age children and offers them roughly the same educational opportunities.

That's been clear throughout the debate over charter schools, with Republicans voting on party lines for a bill to ditch the "cap" of 100 such schools (SB 8) and open the gates to many more with few restrictions about who they must enroll. The bill, different versions of which have passed the House and Senate, infuriates Democrats, especially African-American Democrats like Rep. Mickey Michaux of Durham, who denounced it Monday night on the House floor as "a pure racist move."

Democrats believe that if charters are permitted to recruit just the "gifted and talented" students, for example—as the GOP bill would allow—and are not required to have diverse student bodies or provide transportation to kids who live miles away, the upshot will be a proliferation of schools that are private in nature but receive public funds (supplemented by parents' contributions).

The problem is the Republicans can not find Perdue to discuss the issues. She is at the Kentucky Derby raising money.

Oh come on that's a silly charge, Ann Onee Moose. Why not be negotiating with the Democratic Minority leadership in both houses, isn't that where legislation originates? The real problem is, the agenda the GOPers want to accomplish in Raleigh rarely sees the light of day at all until it emerges as bills that suck up to the extreme right special interests who bought the seats these GOPers fill.

Why would one want to negotiate with the party that has damaged the state for 100 years? Democrats are for defeating, not for negotiations.

The real problem re charter schools in North Carolina is not the numbers per se but that, compared to almost every other state,, NC has practically no regulations of, or requirements for, them. (See here: http://nces.ed.gov/programs/statereform/tab1_11.asp). This means that it is virtually impossible here for a school to lose its charter, as happens not infrequently elsewhere. This is disgraceful. The same situation applies to home-schooling. In both cases, just about anything goes.

What all the anti-government, free-market acolytes don't understand is that private institutions have all the same types of problems and issues as do public institutions without the oversight and accountability.